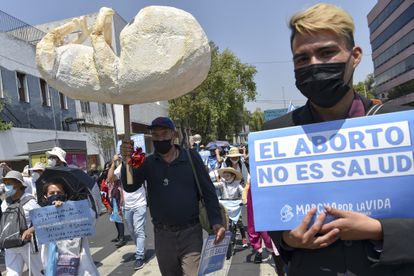 People take part in a march against the legalization of the abortion in Mexico City, on 7 May, 2022. Photo: RODRIGO ARANGUA / AFP

People take part in a march against the legalization of the abortion in Mexico City, on 7 May, 2022. Photo: RODRIGO ARANGUA / AFP

Some 2 000 people marched Saturday in Mexico City to demand the legal right to abortion be revoked, at the encouragement of the Catholic church and conservative groups.

The procedure is already legal in seven of Mexico’s 32 states and in 2021 was decriminalized de facto by the Supreme Court.

The federal capital Mexico City was a trailblazer in Latin America when in 2007 it legalized abortion until 12 weeks of pregnancy.

The march, in which many were decked out in white, made its way down some of the main streets of the capital. People leading the procession carried a huge banner reading “The first right is life.”

‘ABORTION IS NOT HEALTH‘

“Abortion is not health” and “Let their hearts beat.”

Some protesters waved signs that said

In Mexico, where each state has its own criminal code, abortion has been decriminalized in Mexico City (federal district), Oaxaca, Baja California, Sonora, Colima, Veracruz and Hidalgo.

The Guerrero state government was set last week to debate and vote on decriminalizing abortion, but the issue was removed from the agenda after protests by religious groups. The discussion is expected to resume on 11 May.

In September 2021, the Supreme Court declared the laws criminalizing abortion unconstitutional, authorizing it de facto throughout the country.

That ruling lets women who live in states where abortion is still forbidden to file a legal recourse so that health institutions perform an abortion on them.

In Latin America, abortion is legal in Uruguay, Cuba, Argentina, Guyana, and Colombia.

El Salvador, Honduras, Nicaragua, the Dominican Republic and Haiti have the most restrictions, since they do not allow the procedure under any circumstances.