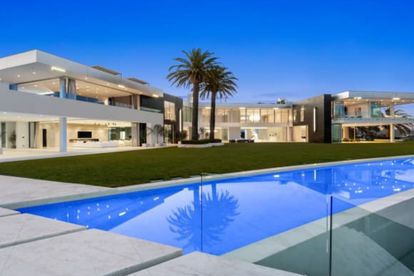 The $295 million (about R4.5 billion) mega mansion situated in the Bel Air section of Los Angeles is built on a leveled mountain and boasts 21 bedrooms and 42 bathrooms. And if sold today, it will become one of the most expensive houses in the United States.

Inside ‘The One’ mega mansion

According to CNBC, the property, dubbed “The One”, has seven water features, including a massive moat that runs around the property. It also has a nightclub, a full-service beauty salon, a wellness spa, a home theater that seats 40, a bowling alley, a 10,000-bottle wine cellar, 30-car garage and an private outdoor running track.

There is also a three-bedroom guest house on the property, just in case you should need more space.

MARY FITZGERALD: ‘Selling Sunset’ or ‘The One’?

The estate agent hoping to help find the mega-mansion a new owner is none other than Mary Fitzgerald from the Netflix hit series Selling Sunset.

“Each room is decorated with a neutral palette paying homage to the stunning landscape, keeping the estate cohesive despite its staggering scale. The first & last of its kind, The One allows you to experience L.A. beyond your wildest dreams,” the real estate agent said on social media.

Watch her give followers a tour on her socials.

THE STORY BEHIND THE $295M MEGA MANSION SALE

The $295 million property is one of the most expensive houses in the US and will go under the hammer today after being placed in receivership in 2021, according to CNBC.

In the early 2000s, Hollywood film producer Nile Niami commissioned architect-to-the-stars Paul McLean to design the “most expensive home in the urban world”, reports Robb Report. All however did not go to plan and after many years of financial problems, law suits, debt and drama, the house is finally complete but up for grabs.

Want a peek at the luxurious mega mansion? Check out the video below. You’ve got to see it to believe it.

Inside ‘The One’ mega mansion

ALSO READ: This 9-year-old billionaire owns a fleet of supercars & a mansion!