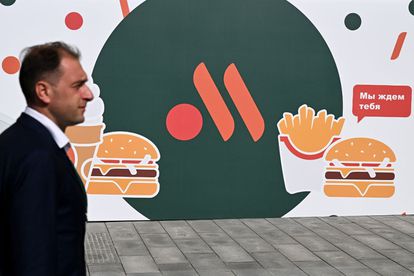 The new logo of the Russian version of a former McDonald’s restaurant before the opening ceremony, in Moscow on 12 June 2022. Image: Kirill Kudryavtsev / AFP

The new logo of the Russian version of a former McDonald’s restaurant before the opening ceremony, in Moscow on 12 June 2022. Image: Kirill Kudryavtsev / AFP

Former McDonald’s restaurants in Russia have been renamed “Vkusno i tochka” (“Delicious. Full Stop”), the new owner said ahead of their grand re-opening later on Sunday.

“The new name is Vkusno i tochka,” Oleg Paroyev, the director-general of the new group, told a press conference in Moscow.

ALSO READ: Biltong flatbread: A braai side dish that will become a family favourite

MCDONALD’S ANNOUNCED IN MAY THAT IT WOULD LEAVE RUSSIA

Replete with a new logo to replace the Golden Arches, the restaurant on Moscow’s Pushkin Square – where the very first McDonald’s opened its doors to long queues and great fanfare in January 1990 – was due to open its doors again at noon (09:00 GMT).

The US McDonald’s fast-food giant announced on 16 May that it would exit Russia in the wake of Moscow’s Ukraine offensive.

Three days later, Russian businessman Alexander Govor, who had been a licensee of the chain, bought the 850-restaurant operation.

“I am very proud of the honour that developing this enterprise has given me,” Govor said on Sunday.

“I am ambitious and I don’t only plan to open the 850 restaurants but to develop new ones.”

Under the sale conditions, Govor agreed to retain employees for at least two years and fund exiting liabilities to suppliers, landlords and utilities, McDonald’s said.

The price of the transaction was not disclosed but in announcing its exit, McDonald’s said it planned to take a one-time charge of $1.2 billion (Around R19 billion) to $1.4 billion (R22.2 billion) to write off the investment.

McDonald’s had employed 62 000 workers in Russia.

Govor, a licensee since 2015, has operated 25 restaurants in Siberia. He is co-founder of Neftekhimservice, a refining company, and a board member of a firm that owns the Park Inn hotel and private clinics in Siberia.