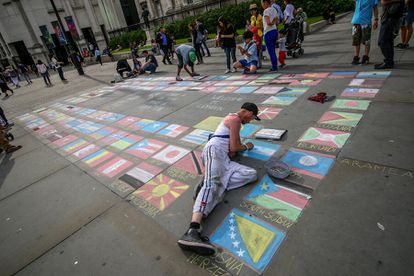 London is home to 8.6 million people – the highest population in its history.

Using figures from the Mayor of London’s Data Store, the Daily Mail has created a map of London showing the largest foreign born populations by borough.

People from India were the dominant nationality in ten areas, while people from Bangladesh, Nigeria, Poland and Turkey each had the highest numbers in at least three areas.

The highest proportion of foreign-born Londoners are found in Brent and Haringey at 53.3 percent, followed by Kensington and Chelsea (51.8 percent) and Westminster (50.9 percent).

London has reached the highest population in its history and is also at its most diverse https://t.co/S23l5WjfJQ pic.twitter.com/wlUfDTKRCx

Statistics show a trend of people of particular nationalities moving to boroughs already well-populated by people of the same nationality.

South Africans seem to have flocked to Wandsworth, where 28.1 percent of the population are South African-born.

The publication predicts that the rise of non-British born Londoners will bring the capital’s total population to more than 10 million in 2031 and to 11 million by 2041.

Take a closer look at how London has evolved over the centuries: