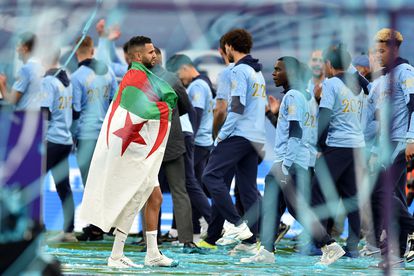 Manchester City’s Riyad Mahrez with the Flag of Algeria after the Premier League match at the Etihad Stadium, Manchester. Picture date: Sunday May 23, 2021.

Manchester City’s Riyad Mahrez with the Flag of Algeria after the Premier League match at the Etihad Stadium, Manchester. Picture date: Sunday May 23, 2021.

Algeria international and Manchester City star Riyad Mahrez showed his romantic side when he proposed to fiancée Taylor Ward this week.

The pair have been dating for 16 months.

During a trip to Mykonos with family and friends, the 2019 Africa Cup of Nations (AFCON) winner popped the question with an engagement ring worth a reported £400 000 (R8 million).

In a post on Instagram, the 30-year-old two-time African Player of the Year winner wrote to his nearly seven million followers: “So happy for everything you are the best, you’re the one I need in my life forever.”

Meanwhile, Ward also took to Instagram to share a snap with her 1.1 million followers with the caption: “There’s no one I’d rather do this life with, here’s to a lifetime of us. Can’t wait to grow old together I Love You.”

Mahrez, who made his name at Leicester City, was previously married for six years to former model Rita Johal with whom he has two daughters.

After winning the English top-flight with the Foxes in the 2015/16 season, Mahrez moved to Etihad Stadium and has become a key member of Pep Guardiola’s squad.

Mahrez played a total of 158 matches for Leicester City scoring 42 goals in all competitions.

READ | BAROKA FC CONFIRM THE SIGNING OF SA UNDER-23 MIDFIELDER

In the recently-concluded season, Mahrez scored nine goals in 27 league games as the Citizens won the 2020/21 league title.

To date Mahrez has scored 27 goals in his 87 total matches for Manchester City.