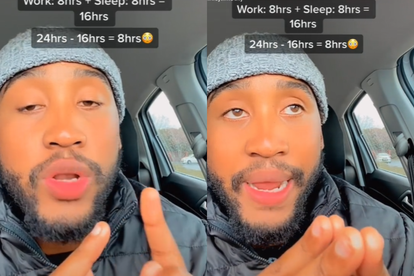 This man wants his lost eight hours a day back. Image via TikTok @lihlejustintimothy

This man wants his lost eight hours a day back. Image via TikTok @lihlejustintimothy

For many people, waking up, working, and coming home to sleep is a daily routine. While many people have taken steps to free up more of their time, there are still an overwhelming amount of working-class people who lose so much of their time that they just can’t believe it. One man recently left many people laughing out loud after he headed online to complain about all the hours he is missing out on in life between working and sleeping.

Sadly, many locals could relate with what he was saying – some even blamed the current ruling party for not ensuring people have more time for themselves.

Man wants his lost eight hours a day back!

How many times have you set down and wondered where time has gone after getting very little done? You are not the only one.

A hilarious TikTok user, Lee-Justin Timothy recently headed to the app to complain about how many hours he has been missing out on every day.

In the funny clip, he explains that eight hours go to work and another eight hours go into sleeping which is 16 hours. He then asks about the remaining eight hours since one day has 24 hours.

Clearly unhappy about the loss of time, he captions his post:

The post was very relatable with a number of people who complained about how things such as travelling and traffic were stealing their time from them.

Others blamed the ANC for not providing better opportunities that will allow people to have more free time to live.

“So when do we start the movement to challenge the whole system? Because it’s scammed us long enough.”