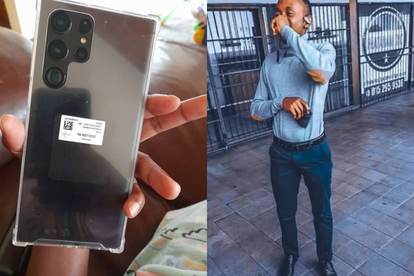 This man bought his ex girl a new phone. Images via Twitter: @_mashudu_M

This man bought his ex girl a new phone. Images via Twitter: @_mashudu_M

The internet has been left divided by one man’s arguably strange gesture. Heading online, the man shared how he decided to purchase his ex-girlfriend a phone because he couldn’t afford to do it while they were still in a relationship.

Many people have been blown away by the man’s gesture with some of them praising him – others however labelled him a fool.

Man spoils his ex with an expensive Samsung phone, gets mixed reactions

Not many people will work hard to keep promises to their former lovers but one man did.

Taking to social media on 10 May this year, the young man with the Twitter handle, @mashudu_m shared how he made the decision to buy his ex-girlfriend a Samsung S22 phone even though they aren’t an item anymore.

According to him, he decided to do it because when they were together he couldn’t do anything for her – something that obviously negatively impacted him.

“I didn’t buy anything for my ex when we were still in a relationship, because I had nothing…so today I decided to bless her with Samsung S22,” he wrote.

“We got in a long relationship… I had nothing. She’s the one who got away… But now I have something as she loved me while I have nothing… I think is better if I get something for her. I no longer need her. I have someone now.”

“There are partners we feel like we owe a lot to and at times feel like we couldn’t spoil them as much as they deserved or we wished to, now when an opportunity presents itself we feel the need to go and amend that part at least. Good for you bro.”

“Nice, now she can take beautiful pictures with her new boyfriend. Very thoughtful of you”