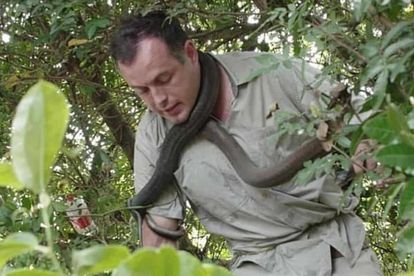 Durban snake rescuer Nick Evans has battled many snakes in his day but boy did the first month of 2021 give him a run for his money when a “massive Mamba” constricted around his neck during a rescue in Chatsworth. Evans said he received a call from an informal settlement in Chatsworth and was told that there was a huge, black snake in a tree that desperately needed to be removed.

Evans said there was a large tree which the Mamba was supposedly in.

“The one man was trying to point it out to me, but I just could not see it. Eventually, I saw a shed skin, from a mamba. I was starting to think they had seen the skin and thought it was a snake. Due to the way the tree was growing, I didn’t really climb up, it was more across, over the river. I was carefully walking along the branches, determined to find the snake,” he said on Facebook.

“I looked to my left, and there it was, right in front of me! A massive mamba! ‘Bloody hell’, I said in shock,” he added.

‘COILS AS THICK AS AN AVERAGE ADULT ARM’ – EVANS

Getting comfortably balanced on branches, Evans reached forward with his tongs and as he did so, the snake started moving.

“Its coils, as thick as an average adult arm, started unwinding, slowly. I grabbed what I could, but very quickly realized that I had grabbed the tail end. Now I got nervous. I once had a mamba by the tail in a tree, and it swung back [at] me,” he said.

“As the head-end neared, I grabbed the neck with my tongs. The strong snake started trying to pull out of my grip. I balanced the tongs on a branch, let it reverse its head back into the tongs, and grabbed the head. This was an enormous mamba. It started wrapping its large coils around my head! It covered my eyes at one point, and I sucked my lips in to avoid getting it in my mouth!” he added.

THE MAMBA WAS ‘INCREDIBLY POWERFUL’

Evans said he started climbing back towards land, with the mamba wrapping around his neck.

“Then, I got caught in a thorny creeper. It wrapped around my waist, which wasn’t a problem. The problem was that it had wrapped around the mamba’s body and my arm. If I ripped through it, I’d tear open the mambas skin, and I really didn’t want that,” he said.

“I asked one of the community members to come and cut the creeper. While waiting for this, the mamba was squeezing tighter and tighter around my neck, and I was beginning to wonder whether I had a python here or a mamba! It was incredibly powerful, and I was genuinely struggling. If you look at the pics, you’ll see that I am,” he added.

Evans the rescuer said that when he was cut free and stepped onto land, he was very relieved to get the snake off his neck.

“Shame, it had a tough life there. I believe it was isolated to this tree and the small bank below. It would have had an abundance of food in the form of rats, but it would have had a hard time at remaining undetected. You could see this was true, as it had a lot of bumps and bruises. It had an injury which clearly indicates it was stabbed with something. Now, it’s in a nature reserve, where it doesn’t have to worry about people,” added Evans.

The Mamba, which Evans called a “beast,” weighed in at three kilograms.