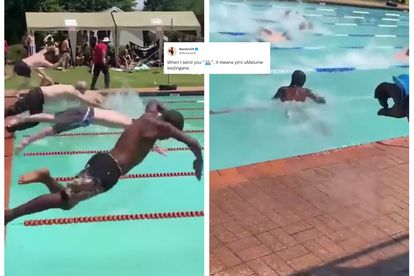 Nando’s has taken a jab at ‘Malume’ – the man whose dismal swimming performance in a race went viral.
Image via Twitter

Nando’s has taken a jab at ‘Malume’ – the man whose dismal swimming performance in a race went viral.
Image via Twitter

Nando’s has done it by tickling the funny bone of Mzansi … but this time, it’s at the expense of poor “Malume” – a man who went viral for his dismal performance at what appeared to be a swimming gala.

The fast food restaurant poked fun at the man who had South African tweeps in hysterics over his swimming “skills”.

This week parody account Man’s NOT Barry Roux posted a video of “Malume”, a man whose swimming gala performance trended on Twitter.

In the clip, Malume appears to take part in a race for older men – possibly for parents of schoolchildren.

But it starts off on the wrong foot after Malume takes a questionable dive into the water and appears to struggle whilst his competitors sail past. Not giving up, the man continues to flounder, long after it becomes clear that he is dead last. In the background, friends and family cheer him on, despite him obviously taking last place in the race

But whilst many have been laughing at poor Malume, other tweeps have praised the boy’s determination, even in the face of dismal loss.

@PresleyCephas: “Whenever I think of giving up on my dreams,  I hear voices in my head shouting “Hamba Malume!” That gets me going”

@EcoSureZW: “Be like Malume, never give up. Finish your race despite obstacles you may face”

NANDO’S HAS THE LAST LAUGH

Following the viral video, Nando’s attempted to take the Mickey out of Malume with a tweet.

The account posted: “When I send you [swimming emoji] it means yimi uMalume wezingane [I am the uncle/ Malume]”

But Nando’s was not having it and reposted a quote made famous by SA’s darling Bonang Matheba. The media personality’s pinned tweet reads: “They have to talk about you because when they talk about themselves, no one listens”.

Bonang herself caught wind of the “chicken beef” surrounding Malume and replied with a crying-with-laughter face emoji.

Another flamed chicken restaurant – Mambo’s -also weighed in on the action. “Dive in and drown in flavour”, they tweeted, taking a cheap shot at poor Malume.