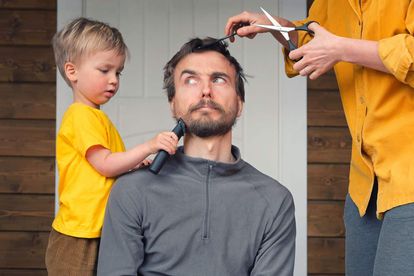 Yeah, so it’s me again. It’s day whatever, and we still haven’t been paroled. However, the clowns at the top have decided to parole 19 000 criminals to come join us in a different kind of lockdown.

Eish, do you really think those guys are gonna go from one prison to another? From being locked down for 23 hours a day to now only having to stay in the comfort of their houses for 21 hours a day (only if they are training for the next Two Oceans).

Never, Bru…those guys are going to be breaking into houses and shops, but not to steal money or a plasma TV, but rather to search liquor cabinets that haven’t already been plundered, or to look for smokes they can sell back to you the next day for four times the retail price.

Oh Corona, I have to tell you…I’m in such desperate need of a makeover from my hairstylist. I caused such a disaster last week that even if they allowed us to go do our hair, I don’t know if she would see me.

Hairdressers, you see, will only be able to operate on Level 1. You of all people will know when that is, but in my mind it’s so far into the future that it’s unimaginable.

Already people are walking around as if they were extras in an 80s Bon Jovi music video, with their home-cut mullets, stubble and long side-burns — and that’s just the women! Those luscious blonde locks from before you arrived, have now turned into dirty orange straw, or have just been dyed dark brown.

The men look like cavemen, shame. If they haven’t lost all their hair to a no.1 buzz cut, then you can tell how much their wives love them by the size pot they used for ‘the trim’.

My personal experience of no hairdresser turned into an epic disaster that I thought I should share with you for a laugh – it wasn’t very funny at the time, but it should be used as an example as to why we want – no, NEED- our hairdressers back on every level.

It started of with every good intention of making my hair look fabulous. My hair was a default-Corona-ombre with my natural roots showing up and the ends so split they wouldn’t look out of place in the gymnastics Olympics. Not to brag or anything, but I’ve been to the hairdresser so much in the past few years I had forgotten that natural roots existed.
Mine, as it turns out, are the mousey, dull colour of damp cardboard, streaked with signs of old age. They were clashing with my face mask.

DIY streak kits: I had fun…

So I decided on some DIY streak kits I was allowed to purchase on Level 4. I had visions of streaks of auburn, copper, pearl and blonde, similar to what was on the box. I prepared each colour, turned up the “booty-shakking” tunes and went to work deciding which molecule of hair was going to be streaked which perfect colour. I had fun.

Well, let me tell you, after the allotted time I could already see that things weren’t going to develop as planned. I hoped that after I washed and blowed it, it would look like an autumnal wonderland, I quickly realised it looked more as if a spotted hyena mated with a ginger zebra.

The freak-out that followed included screaming, wailing and crying — and that was just from the husband. No matter which way I brushed it I looked like I would fit in nicely with the Red Berets, albeit with a touch of Irish.

Through the tears of laughing so much, I managed to contact my hair stylist Roxie.

Roxie is a rare breed of a hair-expert, in that you do not have to prove you have an internal organ for sale before you enter her kingdom. She is also brilliant with colour (that’s why I have not seen my natural colour in years). I sent her pictures with a massive SOS! and she responded right away with a few expletives.

So I called her to calm her down, and talk her off the ledge, and eventually she instructed me to go to the pharmacy and purchase a certain number hair dye that will counter the ginger ninja happening on my head.

I put on my scarf, feeling a lot like the “doek crook” NDZ [Nkosazana Dlamini-Zuma], and with Roxie on speed dial, I was off to Dischem. It had to be a certain number dye, and Dischem didn’t have it.

‘Shouldn’t these colours be banned under Level 4, Minister?’

What they did have was every other colour under the sun. Now, if you were a lady, and so inclined to do your own locks, you too would have experienced what I’m about to tell you.

Chocolate, Cappuccino, Mocha, Cinnamon and Red Velvet are not pods for your Nesspresso machine, they are colours.

Champagne, Red Grape, Sangria, Sienna Cider and Burgundy are not sold per 750ml with a cork (shouldn’t these colours be banned under Level 4, Minister?)

Fudge Indulgence, Hazelnut Delight, Cherry Cola, Creme Caramel sound more like something you would get at a funfair rather than on your brain cover.

They even have a colour called Aubergine. It looks nice on the box, but my luck it would come out looking like an aubergine that has been boiled, braaied then baked.

Eventually, after standing in line forever to go into Clicks, but still not finding the certain colour recommended by Roxie, I called her for the 26th time. By now you could hear her patience was wearing thin, but she was still talking to me, so I was good.

We came to the conclusion that no champagne golden blonde was going to cover my hot mess, so let’s just go brown and be done with it. I chose, what said on the box “Brilliant natural brown”. The small print said something about blonde reflections and the lady had a beautiful smile.

At home I started to prepare everything, this time doing exactly what they said to do — no deviation or detour.

Self-dying (or dyeing) is like playing the lottery; if the lottery had as many moving parts as Monopoly. You have to put on the gloves first, and cover up your clothing. If only some men were as diligent as this with condoms, perhaps we wouldn’t be in such a worldly mess.

However, with the gloves on you cannot do ANYTHING else. Those gloves are so flimsy and spastic you feel as if you don’t have fingers, but I persevered and started my transformation with the purple liquid.

I added a few splotches to my bathroom cabinet, which turned out great because I got to see the desired colour of the dye straight away. I shall just have to Jackson Pollock it through decoupage one day.

A matter of timing

Corona, I did not want to make a mistake, and had destroyed the soul of my lifeline, Roxie. I left it to develop the full time it stated, just to be daring. Once the stopwatch was up, I jumped in the shower and did all the after-care I had to.

I was so nervous after my blow-dry to look in the mirror, just in case I still looked like something from the Kruger. But…Luckily for me, the blondish-copperish-orange mess of before had gone.

In its place was a colour so dreadful it was the cause of my epic disasters above. Yip, I am now sitting with hair the same colour as my natural colour was (minus the grey). It’s the colour of metal that has been sitting in the sun for so long, it’s faded to a dull brown. It’s unmemorable. Blah.

So, if anyone says that hairdressers are not an essential service, tell them that they are more essential than peace officers patrolling Ballito. Or DSW workers in Durban who are more on strike than not.

They are there for emergencies. Can you imagine being in an accident and a woolly mammoth comes to give you CPR because the barber is closed?

I wonder why NDZ is always wearing a doek? Is she trying to hide her hot mess too?

I hope they win the right to open because damn, I’ve got an appointment with Roxie for an emergency as soon as they do!

So please ‘rona, just like you aren’t infecting the construction worker who is doing work for the state, but you are infecting the ones doing private jobs, could I ask you to stop at the door of hairdressers and think about my journey and plight above. Rather go after the beauticians who do waxing – they deserve some karma (joke).

Anyway, we are still waiting for Madam President to inform us of the next set of silly rules, so I’ll write again soon.
Please, don’t take care of yourself.