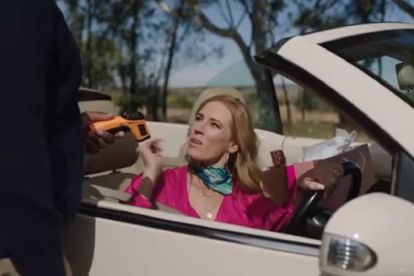 A new King Price advertisement has left South Africans in stitches once more.

The latest in the “when others don’t make sense” series of advertisements shows how checking someone’s temperature or the word ‘permit’’ can be misunderstood.

In the advertisement released on 29 May 2020, a woman can be seen approaching a roadblock – where a police officer proceeds to check her temperature and ask for her permit. This is of course a play on the reality of SA’s lockdown situation where checking temperatures and asking for permits have become a reality.

“Sometimes…you just have to laugh. And luckily, us South Africans are good at that! King Price is #UnapologeticallySouthAfrican and proud to be the only insurer to offer premiums that decrease monthly. To us, it doesn’t make any sense to pay the same every month, to insure something that’s worth less every month. When nothing out there makes any sense, we do. Also: #StayPutBeLekker”

With the release of previous advertisements that also went viral, Natalie Bisset, general manager of marketing, said King Price is “informal, funny and a little tongue in cheek, but always respectful” and that as a proudly South African brand, is big on humor.

Back in 2018, the ‘Do Something Sexy to a Tractor’ advertisement from King Price Insurance went viral after it was shared to various social media and instant messaging platforms such as WhatsApp. At the time, subscribers on YouTube said it is the “Best add ever!” with some saying they searched for the advertisement just to watch it again. Others believed we had a new ‘classic’ South African television advertisement on our hands.

Another ad in the above-mentioned series, ‘Lobola is no laughing matter…But not making sense can be’ went viral after it was released. In the video, a young man with an odd accent messes up his lobola payment.