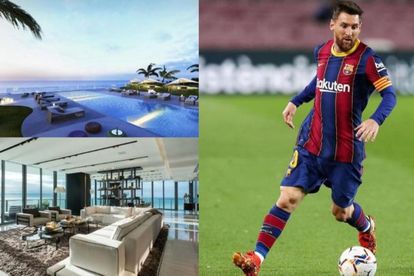 The 33-year-old soccer player signed to FC Barcelona has purchased a luxury apartment taking up the entire ninth floor in an upmarket apartment building in Florida, Miami. The four-time UCL winner has reportedly spent a phenomenal $7.5 million (about R102 million) on his latest property purchase.

A HOME FIT FOR A FOOTBALL KING

According to The Sun, the property is located on Sunny Isles Beach and offers spectacular 360-degree views of the ocean. Messi’s new home comes with four bedrooms, four bathrooms and a 1000-bottle wine cellar located in the 511 square metres of indoor space.

The pad, which came fully furnished, boasts all the facilities that a millionaire could wish for. As well as a private pool, Messi and his guests will have access to another six swimming pools in the building. Other facilities available to residents include a spa, a fitness centre, a yoga studio, a children’s playhouse, an on-site private chef and a champagne bar.

Lionel Messi: Net worth and investments

According to reports from Goal, Lionel Messi’s net worth is estimated to be around $400 million (R5.7 billion).  Messi has also been part of prominent campaigns with Pepsi, Gillette and Turkish Airlines. He also has three hotels in Barcelona.

Having purchased a first apartment in the nearby Porsche Design Tower just two years ago, it seems as though Messi is expanding his property portfolio in Florida. It appears that the footballing legend of Argentinian descent may be planning to spend more time in the US since he is building up a property portfolio in Miami.

Messi, who has played his entire professional career at Barcelona, has previously hinted that he would like to play in the United States one day.

However, the future is not yet certain for this footballing superstar whose contract with FC Barcelona is expiring this summer.  But one thing is sure, Messi will enjoy spending time in his new Florida pad!