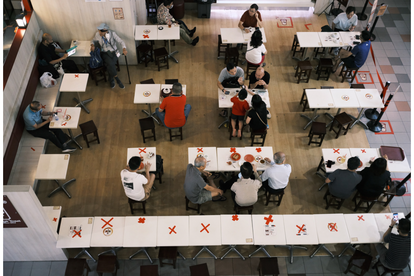 Some of the changes include inter-provincial travel making a return, alcohol sales being permitted and schools reopening. One new rule mentions South Africans can also be jailed for being in a room with too many people.

New rules for alert level 3 published by the Minister of co-operative governance and traditional affairs Nkosazana Dlamini-Zuma state that those who attend religious gatherings, restaurants, or conferences with a maximum headcount of 50 people indoors or 100 people outdoors could be up for a criminal offence or a fine.

This simply means those who visit sit-down restaurants, religious gatherings and conferences are also responsible for counting heads before walking in to keep track of the number of people in the space.

This rule does not apply to spectators at sports events because attending sports events is still not allowed under alert level 3.

AS IT IS IN THE GOVERNMENT GAZETTE

“Any person who attends a restaurant, bar, tavern, and who knows or ought reasonably to have known or suspected that the number of persons attending exceeds the limitation provided for in paragraph (b) commits an offence and is, on conviction, liable to a fine or imprisonment for a period not exceeding six months or to both such fine and imprisonment.”

This rule only came into effect for the new alert level 3.

President Cyril Ramaphosa emphasized in his address that it is a criminal offence if the number of people on the premises exceeds the number of customers and employees allowed.

In his address on Sunday, President Cyril Ramaphosa also emphasized the responsibility that managers and owners of restaurants and shopping centers and taxi drivers have to ensure everyone wears a mask at all times.

ALSO READ: SA back on level 3, but Ramaphosa’s TV makeup moves to the next level