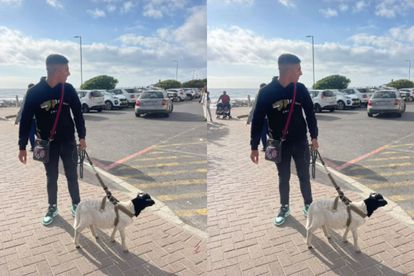 We often see dog owners taking their furry friends out for walks on Sea Point Promenade in Cape Town, but have you ever seen a lamb on a leash? Nazeem Brenner went viral on social media after he took his lamb, Biryani, for a walk on the Sea Point Promenade.

Speaking to IOL, Brenner said his one-hour walk turned into a five-hour walk after he was stopped by passers-by wanting to meet Biryani.

Nazeem Brenner is originally from Oshikango, a small village next to the Namibian border. He told IOL that he was watching a video about lambs with a friend and then had the bright idea to get one as a pet.

Little Biryani was just over a month old when the 20-year-old bought him for R1,000 in Darling.

“After I brought him home, we still had to feed him with a bottle but he is very friendly and just follows me wherever I go,” said Nazeem.

While visiting family in Grassy Park, Cape Town, Nazeem decided to take Biryani out for a walk on the Sea Point Promenade. What was meant to be a relaxing walk by the sea, turned into something else when everyone wanted a picture with the lamb.

“When I first pulled up I was a bit worried about what the older people would think but children and people from all ages running to see me walk Biryani, there was even a group of traffic cops who took pictures,” recalled Nazeem.

“I even ended up in Camps Bay because people wanted to take pictures of us,” he said.

ALSO READ: Step aside, Musa: Man with 15 wives is ‘too smart’ for ONE partner

WHAT PETS CAN YOU OWN IN SOUTH AFRICA?

According to Jozi Wire, owning an “exotic” pet in South Africa is unusual as most people have dogs and cats. The publication reports that the most popular exotic pets are Iguanas, geckos, chinchillas, African grey parrots and non-venomous snakes.

Parrots are the top exotic pet in the country and there are little to no permits required for them.