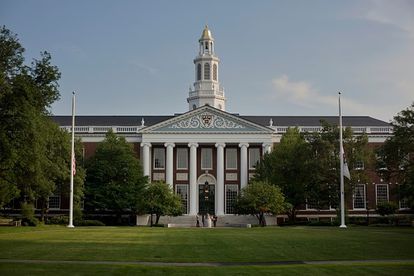 The Baker Library of the Harvard Business School on the Harvard University Campus in Cambridge, MA, Tuesday June 30, 2015.

The Baker Library of the Harvard Business School on the Harvard University Campus in Cambridge, MA, Tuesday June 30, 2015.

According to the teen, he planned his future since the tender age of 13 when he was at Addington Primary School.

“I just thought that I needed to seriously look forward. I know it’s weird for a kid to think that, but it was what happened.”

After speaking to his primary school principal, Gail Teunissen, Mfundo discovered scholarships that were available and attended Northwood Boys High on a full scholarship.

“The thought of Harvard was never really on my mind though until I read about a Crawford Sandton chap that had been accepted to Harvard and Yale. I thought it was possible when I heard about that.”

“It was a series of back and forth e-mails. At first she told me it was difficult because the school only offered partial scholarships. But I mailed and explained my goals and aspirations for myself and after a while I managed to get in.”

The road to Harvard University

From there on the vision of the young man steamrolled forward, with teachers recognising his natural talent.

“Many of my teachers told me it was possible for me to attend a college overseas and I began gaining interest in Harvard. It was quite a process initially and throughout the phases of it, parts of me didn’t really know if it would happen.”

Mfundo underwent a number of obstacles before being accepted, including essays, the SATs and a rigorous administrative application process.

“It was indeed a long process and there was a point when I sort of gave up on Harvard, but there was a lady at the US embassy, Susan Knowles, who runs the Education USA programme. She had something called Opportunity Funds which helps students through the entire application process. She was encouraging me to continue, helping me understand the process and what was required.

“She told me about Harvard representatives that were coming down to give a talk. I attended the talk and they said the only way you won’t get in is if I didn’t apply. I took that to heart and I spoke to Robin Worth, Harvard’s director of international admissions; somehow she had heard of me.

“I was accepted on my trial results which were eight A’s.”

Disadvantaged but living with the privileged

The youngster says his ultimate plan is to come back to South Africa and contribute to its growth.

“I want to come back to South Africa and find a way to market our country. I do not want to get into politics directly, but I would really want to contribute back into our country.”

When asked how it felt to be a previously disadvantaged student in a world of privilege, Mfundo said he has since found many like himself.

“In recent months I have gotten in touch with people from SA who have been taken from townships and into this privileged world. When I first came to Crawford it was intimidating and I thought wow, look at all these people, how am I going to fit in. I am all alone. But then I realised there is a large network of people like me coming from this background throughout the country.

“I came here in Grade 11. I remember the first day here. I hadn’t been here before and I arrived in a taxi. As I was walking in there were people with Ferraris, Porsche, Mercedes Benz, and I just wondered what I got myself into.

“I kept telling myself ‘remember who you are and why you are here’. That was critical. If you remember that you can have fun but not lose focus.”

Mfundo says he is also thankful to his family who gave him unrelenting support in his vision.

“I initially lived with my grandparents and cousins. It was a big family. It sort of meant I had to find my own space in that family and find my own dynamic. I only moved in with my mum, step-dad and two half-sisters recently.

“There has always been a spirit of support in the family. It wasn’t like, ‘hey we are going to help you academically’, but man, they were always encouraging. They backed all of my decisions. My mum and grandmum were pivotal. There are many temptations in townships with drugs and alcohol. My mum sacrificed the little that she had to ensure I stayed at home and not went out and strayed.

“The people who came along on my journey have been stunning. Whenever I felt frustrated Cathy Constable, the assistant to the principal, or the principal herself reassured me of my ability.“

Mfundo is currently working at Crawford, where he coaches debating and tutors, before leaving for the US in August for the start of the Harvard academic year.

When asked to give advice to other aspiring youngsters, Mfundo said: “I would just advise them to not sit and be comfortable. Go out there and seek assistance and opportunity. Sure, I have been helped along the way but I had to seek the help and seek the opportunity. I think there is an overwhelming amount of opportunity in SA. Be curious, find people who have succeeded – find a mentor and someone who can expose you to these things.”