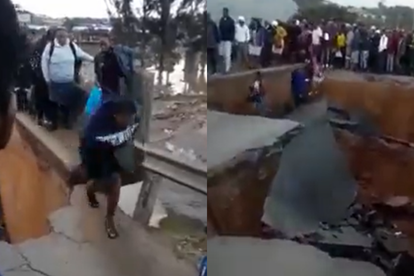 These employees are crossing a dangerous bridge to get to work. Images via Twitter: @thusi_nomzamo

These employees are crossing a dangerous bridge to get to work. Images via Twitter: @thusi_nomzamo

Thousands of South Africans have been left heartbroken by a clip of dozens of KwaZulu-Natal employees crossing a destroyed road to get to work. The clip has sparked massive outrage as many discuss how desperate the employees must be to put food on the table that they would risk their lives.

Many have slammed the South African government for not doing enough to help the victims of the KZN flood and eradicate poverty in the country as a whole.

A short clip of hundreds of employees making their way to work by crossing a road that could collapse at any minute has been shared online by a Twitter user who couldn’t believe how desperate the situation in KZN has become following the deadly floods that have hit the province over the last few weeks.

Taking to the app on 13 April this year, @thusi_nomzamo shared the clip while slamming the employers of the people who risked their lives not to miss time at work.

In the same breath, she slammed the government for the devastating level of poverty in the country that has basically left workers with no choice.

“#KZNFlooding #KZNWeather what kind of employers do our people work for? What kind of desperation is this that they would risk their lives to go to work.

More than anything our government has failed our ppl poverty and desperation will kill our people only for them to be replaced,” she wrote.

“Tjooo this bad… Obviously if one can take a day off, they kiss their job goodbye 🤦‍♂️🤦‍♂️life of a black person.”

“Honestly speaking it’s sad, I walked with these people today and all they were worried about is to get full pay at the end of the month because their bosses have a “No work no pay” Policy 💔

“Poor black South Africans seem to have accepted this life. That’s why they would rather fight for jobs than ownership of the land and the economy.”