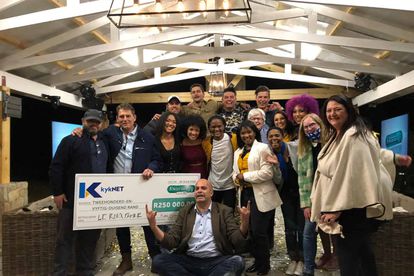 The Roux family — Braam, Manie, Lisa, Adriaan and Heinrich — was crowned as the winners of kykNET’s acclaimed reality show, Kwarantyn, and received a total cash prize of R250 000.

Fans have been following along DStv channel 148 for the past two months and were entertained by the creative food challenges, art projects and early morning karaoke workouts, all within lockdown protocols, mind you.

Not a dull moment was had. The Le Roux family looked back on some of their highlights on the show:

“There were various highlights during our time on Kwarantyn – Lisa’s birthday that we celebrated with balloons and cake, Francois van Coke’s call, the fun in the evenings and the games we played. We’re going to miss Kwarantyn”.

The Scheepers family recalled that meeting celebs Cindy Swanepoel and Stephanie Baardman was a definite highlight for them, while the Le Roux family’s beloved pooch, Vlooi, was a hit with viewers.

Both families agree that Kwarantyn exceeded their expectations – it was a bigger challenge than they ever imagined. Jade said they never expected it to be so emotional.

Manie, in turn, said the experience wasn’t as stressful as expected, but quickly adds that it “definitely wasn’t a holiday either. And Lisa? Well, the cameras almost got to her!

“I didn’t expect there to be so many cameras on us!”

Although the Scheepers family didn’t win, they don’t leave empty-handed either. Caryn wins the prize for being the most authentic and honest contestant. For that, she received R10 000 in cash.

kykNET said in a press release that “this prize was awarded by the Kwarantyn team who kept an eye on the two families 24/7”. The Le Roux and Scheepers families
respectively received R41 000 and R40 000 in vouchers during the series as well.

But that’s not all. The Scheepers family was surprised with the proceeds from selling the art pieces created while on auction. The artwork brought in a total of R156 000, which will be donated to the Scheepers family.

Emo Adams also offered to help Austin with his first online show and will support him with a possible singing career. The touching moment can be viewed below.

“I learnt to not underestimate my capabilities. Some of the challenges seemed impossible, but once I started with it, I realised I could do it!”

Both families also want to extend their heartfelt gratitude to viewers for their support and votes. The Scheepers family said they were grateful for the motivation they received from viewers.

“We love you!”, the Le Roux family said.

M-Net director Karen Meiring said, “Kwarantyn took us through a spectrum of experiences: from darker moments to great joys” and adds that it was “more than a social experiment” to her and the team.

“It entertained and brought cultures closer together. Thank you to Team Scheepers and Le Roux that we could be part of love and loss. Enjoy your well-deserved life away from Kwarantyn.”