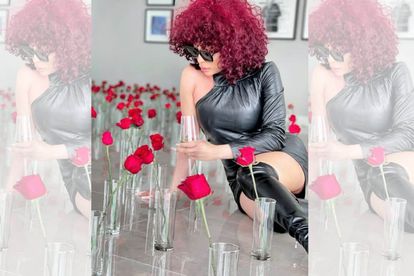 It looks like the controversial South African actress and television host Khanyi Mbau had a special Valentine’s Day with her new bae, the 28-year-old Kudzai Terrence Mushonga.

Inside Khanyi and Kudzai’s Valentine’s Day

Mbau and the Zim “tycoon-turned-fugitive” took to social media to share snaps of their celebrations. One video shows Khanyi teary and smiling from ear to ear after being surprised with a private performance by a violinist, more than 1 000 roses and prezzies from Louis Vuitton that left everyone green with envy.

According to these, he has been eluding the Zimbabwean police for more than four years now after he allegedly duped a businessman out of $166 000 (R2.5-million).

Kudzai is also said to have been the youngest Zimbabwean to own an aeroplane back in 2016. That is why his nickname is “Ndege Boy” — a name he earned after splashing out on a collection of private planes. Now he is splashing out on his new girlfriend.

One source told Sunday World that the two lovebirds have been having a good time, including cozy date nights and dining at expensive restaurants. Another source said they started off as friends and their relationship grew from there.

“Tebogo and Khanyi have been over for a while now. The two seem to be madly in love. Khanyi has been telling her friends that Terrence is a sweetheart of a guy,” said the source.

The source further said Khanyi’s friends really like him because they did not see a future for her with Tebogo.

“He takes good care of her and has been spoiling her with expensive gifts.”

Couple spoils and Giving back

According to TimesLive, Khanyi also didn’t come to play with the gift she gave to Kudzai. She gifted her bae with an Apple desktop that costs between R25 000 to R100 000, depending on the specs.