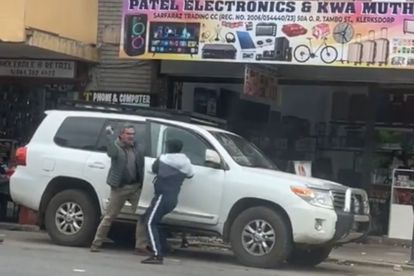 Faith in the police is in short suppy for Klerksdorp residents. Last month, a local went viral for fighting off FIVE attackers – Image via Twitter @RomanCabanac

Faith in the police is in short suppy for Klerksdorp residents. Last month, a local went viral for fighting off FIVE attackers – Image via Twitter @RomanCabanac

On Wednesday 20 July, a middle-aged Klerksdorp man went viral after a video of him single-handedly fighting off three robbers was shared on social media. A local content creator, Thato Ledimo, caught all the action on her cellphone and says she wanted to highlight crime in the small North West town. Speaking to TimesLive, Ledimo added that a part of her regrets taking the video because she has since received death threats online.

Since Thato Ledimo posted the video of the Klerksdorp “Rambo” fighting off robbers with a knife on Facebook, the video clip has been reshared on Twitter and TikTok.

The video, posted by @RomanCabanac on Twitter, has been viewed more than five million times in less than 24 hours.

“But why would I need a gun in South Africa,” the tweep captioned the video.

THATO LEDIMO, THE WOMAN WHO CAPTURED THE MOMENT

As per TimesLive, Thato Ledimo says the incident occurred around 09:19 opposite the Home Affairs offices in the Klerksdorp central business district (CBD).

“That place is a known crime hotspot. You don’t walk with your phone in your hand at all. This was the reason I took the video, to create awareness,” explained Ledimo.

“I don’t feel bad for not assisting. I’m a woman and also feared for my own safety. There were hundreds of more people who also stood and watched him as he was fighting to protect his possessions.”

Ledimo also told the publication that she regrets posting the video because she has been receiving threats from social media users.

“I fear for my life and that of my family. I’m receiving threats on Messenger. People are telling me where I live, where my husband works and that they know everything about me. This has left me shaken.”

KLERKSDORP ‘RAMBO’ WILL NOT OPEN CASE

According to the South African Police Service (SAPS), five men were reportedly attempting to rob the Klerksdorp man or hijack his Totoya 4×4. The police added that he has refused to open a case against the suspects.