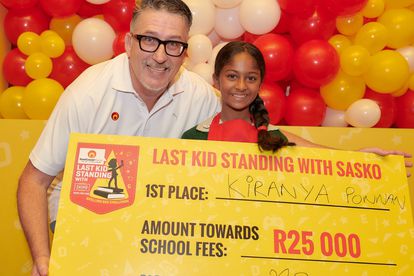 She was crowned after an intense, but fun, four-week campaign with over 1,000 entries of future leaders entering the competition. The Last Kid Standing season two finale took place at the Suncoast Maharani Hotel on 24 May.Three Grade four finalists – Mohamed Ahmed, Kiranya Ponnan, and Bella-Jade Packer, competed to win the grand prize.

Their parents and guardians joined the East Coast Radio team and the media to watch the nail-biting finale. Kiranya was declared the last kid standing after correctly guessing the spelling of the word “amazing”.

“I’m excited and look forward to playing with my PS5,” said Kiranya after being crowned the spelling bee champion.

Due to the competition’s popularity, SASKO decided to come on board and join the campaign as the headline sponsor.

“Partnering with ECR on this campaign was a perfect fit and not because they are a big brand but mainly because of their values that resonate with us. When you look at SASKO, we are a brand that is born in our communities, we serve in our communities, we employ people in the community, and we are about sharing. ECR is the station that influences its environment, so for us it was a natural fit.” said Zintle Botha, Marketing Director of SASKO.

The three-hour finale was streamed live on Facebook, with over 1,000 people watching the event.

“After a successful Last Kid Standing campaign last year, we knew we would find a partner who shared the same values and would help us take this campaign to the next level. SASKO was a perfect fit and has enabled us to take this campaign and make it bigger, better, and impact more people and schools around the province,” said Boni Mchunu, MD of East Coast Radio.

“For me, the biggest thing has to be the prizes the kids received throughout the campaign. SASKO will be memorable to every child that received a prize from them. They have made a difference, especially with the big prize going to the winner,” he continued.

The winner of this year’s competition walks away with several amazing prizes including up to R25,000 paid towards one year of school fees, a PS5 console, a tablet, and lunch for their classmates.