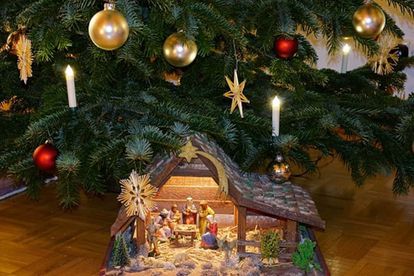 A very, very different nativity scene caused quite a stir in Spain recently.

The controversial toys went on display in the store’s window and caused a mix of positive and negative reactions, with many saying they were offended.

According to Mashable, shop owner, Hector Valdivielso said he was subjected to threats by people claiming to be offended by the artwork.

He said “a man with his wife ordered me to remove the offending scene and said that if I didn’t he would remove it himself.”

Valdivielso reportedly received numerous insults and had to call the police. The shop was also vandalized with the word, ‘pecadores’ – which means sinners. A crowd of people harassed customers and Valdivielso, after which he was forced to remove the scene.

He decided to hold a poll and asked people to vote whether or not the scene should be reinstated. A staggering 78.5% voted ‘yes’.

According to local reports, Valdivielso said “people asked me not to give in to blackmail. So it’s going back in the window.”

“Who wants to come to a store like this to hear a sermon?” It’s a sex shop after all.

Also check out this hipster scene that took over the internet.