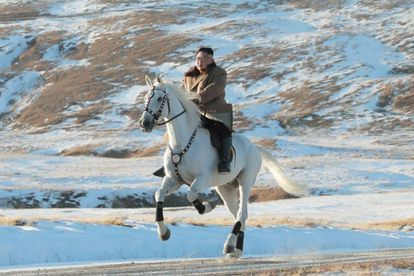 Galloping through forest atop a white horse, Kim Jong Un stars in a new North Korean propaganda video that touts his economic leadership but ignores a recent spate of sanctions-busting missile launches.

Pyongyang started the year by conducting a record seven weapons tests, including firing its most powerful missile since 2017, raising fears Kim could restart long-range or nuclear testing.

But the government-produced documentary released this week highlights Kim’s struggle to right the country’s battered economy, which is reeling from a years-long blockade due to the coronavirus and international sanctions.

“The overriding theme of the documentary is Kim’s devotion to and hard work for the people,” Rachel Minyoung Lee, a non-resident fellow with the 38 North programme at the Washington-based Stimson Center, told AFP.

The video is bookended by footage of Kim riding a white horse, a key symbol of the Kim family’s dynastic rule.

But “I don’t think we should read too much into the horse scenes, much less link them to North Korea’s recent missile launches and North Korea’s missile test plans,” Lee said.

With talks with Washington stalled, North Korea has doubled down on Kim’s vow to modernise the regime’s armed forces, despite reports of soaring food prices and worsening hunger.

The propaganda film makes coded reference to the country’s “worst-ever hardships” in 2021, showing footage of Kim carefully making his way downstairs as a narrator describes how his “body has been completely withered away” by hard work.

This is an attempt to “humanise” Kim, Yang Moo-jin, a professor at the University of North Korean Studies, told AFP.

“They are trying to paint him as a leader who very much loves his people and, as a result, is often overworked and gets tired,” Yang said.

North Korea is preparing to celebrate the 80th anniversary of the birth of late leader Kim Jong Il in February as well as the 110th birthday of founder Kim Il Sung in April.

The shots of Kim thundering along on a white horse “are being used to remind viewers that Kim Jong Un is the descendent of Kim Il Sung, who is very much a sacred figure”, Yang said.

Kim Kyong Hui was rumoured to have died following the execution of her reform-minded husband, Jang Song Thaek, only for her to reappear at a public event six years later.

The slew of videos released around the Lunar New Year could be an attempt to highlight Kim’s vitality, Cheong Seong-chang of the Center for North Korea Studies at the Sejong Institute, told AFP.

“The horse-riding scenes, in particular, seem to have been produced to show off his health at home and abroad.”

“It shows his strong determination and motivation for the new year.”

‘This was brutal’: Elderly woman slain during depraved farm murder