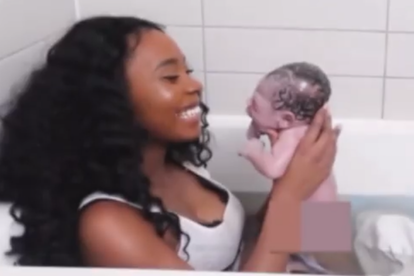 One bold mommy and doula made the brave decision to give birth to her own child in a bathtub at home while filming the entire thing. The clip of the self-birth went viral as many marvelled over how she was using positive affirmations to help her overcome what many mothers can confirm is unbearable pain.

Her little one who she named Hero is all grown up now and cuter than ever.

Birthing at home: The brave mommy who made a big decision

Legaci Allong is no ordinary woman. The young mother of 3 and doula made the decision in January this year to give birth to her own child while on a mission to show other expecting mothers that it is entirely possible to forgo the usual team of nurses and medication to do so.

A video clip that was shared on Allong’s YouTube page, Legaci Birth, shows the young woman with a full face of makeup and a great hairdo while in a bathtub in her own home preparing to give birth to her third son. As expected the video blew up and amassed over 700 000 views as many people eagerly watched her use positive affirmations to overcome the pain.

As a mother who also had a natural birth (in a hospital, mind you), I can only imagine the strength she had to muster to pull it off as I recall begging my midwife to administer me another sedative to help me cope with the agony.

She obviously has strong feelings about using medication during childbirth and wrote this on her Instagram page:

It all worked out in the end

While many health professionals slammed Allong’s decision to birth her own child because they feel it may encourage other women to do the same and put their lives as well as the life of their unborn child in danger, Allong’s little Hero is 7 months old is doing pretty well.

In fact, he is as cute as a button. Allong continues to share information on how she managed to pull off the incredible feat while sharing photos of the little one whose birth can truly be described as an extra special miracle. Take a look at the adorable little one and his cute brothers: