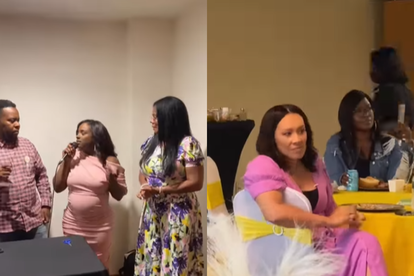 For any mom-to-be, a baby shower is a lovely way of spending time with loved ones while celebrating the new life that is on the way. It appears not all mommies are grateful for people’s presence but rather care a lot about people’s presents. A young mom has gone viral on social media after she shared a clip of herself literally chasing guests away who didn’t bring gifts along with them.

In an Instagram post, the woman in question asks her followers whether or not she was wrong for asking people to leave – a question which receives various mixed reactions.

One great thing about baby showers is receiving gifts for your baby that make your life a lot easier.

Getting gifts, however, shouldn’t be your main concern since the shower is all about celebrating the new life you are about to welcome into the world – and not so much about getting free goodies.

One mom definitely begs to differ after she went as far as to kick baby shower guests with no gifts out of her event.

Taking to Instagram, the young mom with the username @earlyandtia, asked her followers if she was wrong for asking the guests who didn’t bother with gifts to leave.

She also shared a video of herself interrupting her boyfriend while he was thanking guests for coming and playing a role in the shower.

Before he could finish his train of thoughts she added that not everyone contributed and some even came empty-handed.

Unable to hold herself back she also said:

“If you didn’t bring a gift you can get up and go.”

In the clip, many of the guests were taken aback and stared blankly at the mom-to-be who app read to be dead serious.

Meanwhile, social media users had mixed feelings about what she did and shared the following comments:

“You are not wrong the purpose is to the shower the baby with gifts, the food & drinks are a token of appreciation for doing so. If you don’t plan on showering the baby with a gift then don’t waste the parent’s money.”

“She gonna have a rude baby.”