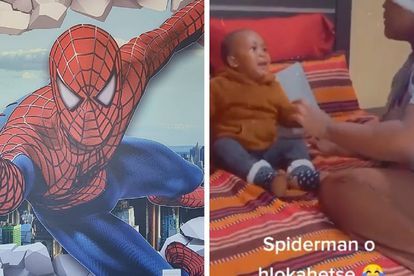 A toddler cried hysterically when his mom told him the sad news that Spiderman had passed. Twitter @Savagemaveriick @mr_dee100

A toddler cried hysterically when his mom told him the sad news that Spiderman had passed. Twitter @Savagemaveriick @mr_dee100

Children may only get to see their favourite cartoon characters and superheroes on the telly, but to them, those are their best friends. This is why when a mom told her toddler that Spiderman had died, he became beside himself…

A video of a mom pulling a cute yet cruel prank on her son has been circulating on social media. The short clip, posted by Twitter user @SavageMaveriick, shows a mom and her little boy seated on the bed as she delivers the sad news that his favourite fictional character, Spiderman, passed away the night before.

All the toddler really wanted was a Spiderman cake, but when she tells him he can’t have one because “Spiderman is dead”, the kid bursts out in tears and throws a screaming tantrum.

“This so adorable and cruel. Kid worried about who is gonna save his cake,” the tweep who shared the video wrote.

Netizens took to Twitter to react to the adorable video, with many laughing at the toddler’s tantrum. Others thought it was a tad bit evil, jokingly calling for the mom to be arrested.

One tweep said: “Spiderman must wake up from the grave and save the day.”

“And this is this young man’s origin story. Arrest the mom,” another tweep wrote.

“Wow but guys, get that you’re tired of watching Spiderman for the 1000th time but never tell them their heroes died. Just say he is on holiday and will be back some other time,” another user replied.

Another user had a cute gesture in the form of a Spiderman wallpaper that he wanted to give to the little man.

“Can someone please put me in touch with this little dude. Wanna bless him with this custom wallpaper https,” he wrote.