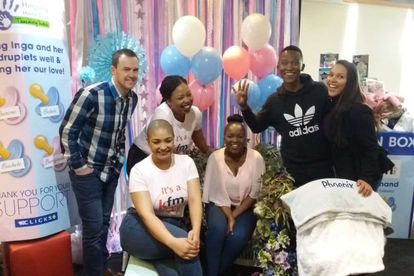 Now, this is all kinds of lovely. When Inga Mafenuka gave birth to the “Cape quads” last month, she went through a wild range of emotions.

Despite being blessed with two boys (Bubule and Buchule) and two girls (Bunono and Bungcwele), the Khayelitsha quadruplets also posed extreme challenges to new mother living in a township.

Cape Quads: Who are the Khayelitsha quadruplets?

Step forward KFM. The Cape Town-based radio station went out on a limb to show their support for Inga and the babies and organised a larger-than-life baby shower for her. LottoStar, Clicks Helping Hands Trust and the good people of the Mother City all chipped in to help Inga navigate her way through motherhood (to the power of four),

For the last month, The KFM Breakfast show have been encouraging their 800 000 or-so regular listeners to donate what they can to further the cause.

Kfm Programme Manager Stephen Werner explained why they were so keen to assist Inga:

“When Darren, Sherlin and Sibs heard that Inga did not have the traditional baby shower experience, the team
wanted to do something special to celebrate her journey into motherhood. Kfm Mornings hosted a beautiful pink and blue shower experience with Inga’s family and those who have supported her in her journey as a new mum.”

“This included close to 800 000 people of the Western Cape who were able to experience the event via the live broadcast and our social channels”.

Furthermore, Clicks confirmed that they will be matching all public donations to help the Mafuneka family, including supplies and baby clothes for at least the next few years. How wholesome!

The Biggest Baby Shower in the Cape would not have been possible without the @Clicks_SA Helping Hand Trust! Thank you so much! #CelebratingInga pic.twitter.com/uAFnYyQgvS

How likely are you to have quadruplets?

This figure varies but ranges from anywhere between 500 000-to-one up to 700 000-to-one. These are astronomical odds.

If there is a history of multiple births on the mother’s side of the family, you are more likely to give birth to twins, triplets, quadruplets, or something even more populous.

In fact, women aged 35 and over may be the most susceptible to multiple births. They encounter a “fertility spike” just before the early development of the menopause.