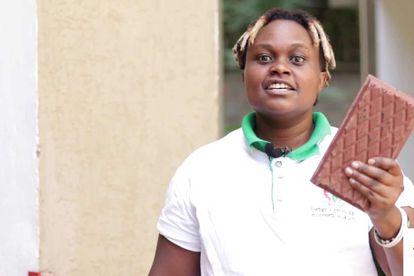 With no capacity to recycle, a young female entrepreneur and invento in Nairobi, Kenya, is making good use of the mounting single-use plastic the country by turning it into bricks.

Nzambi Matee is the founder of a startup, Gjenge Makers, that recycles plastic waste into bricks that are stronger than concrete.

Her company came into being following the development of a prototype machine that turns discarded plastic into paving stones.

One day at the factory means 1,500 churned plastic pavers, prized not just for the quality, but for how affordable they are, says designboom.

Matee, 29, and her team recycle plastic bottle tops and cooking oil containers into bricks, which they then sell to individual homeowners and schools.

“It is absurd that we still have this problem of providing decent shelter – a basic human need. Plastic is a material that is misused and misunderstood. the potential is enormous, but its afterlife can be disastrous.’

In June 2020, Kenya imposed a ban on using single-use plastic waste in protected natural areas, such as national parks, beaches, and forests.

Previously in 2017, the country had already made headlines with a ground-breaking law that saw a nationwide ban on plastic bags.

Yet, plastic keeps piling up across the East African country.

In the capital Nairobi alone, around 500 metric tonnes of plastic waste is generated every single day.

While the country has the capacity to recycle a fraction of it, there is fear that a further 500 tonnes will enter the East African country as a result of a new free-trade deal between Kenya and the US.

According to a 2018 United Nations report, an estimated 13 million tonnes of plastic waste flows into the oceans every year.

Plastics are everywhere, even in what we eat, says supporter of the project and Greenpeace campaigner Amos Wemanya.