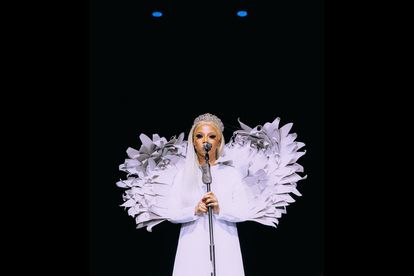 Amid pregnancy rumours doing the rounds, singer Kelly Khumalo has teased her new album, From A God To A King, with the single Akathintwa, which aptly translates to “He is not touched”.

Effortlessly combining Afro-pop and gospel, the main message behind the song is that, even though it might be easy to disrespect another person when he is blessed, you will not touch him.

Since the death of Robbie Malinga in 2016, Khumalo has collaborated with Mondli Ngcobo producing hit after hit, such as Ngathwala Ngaye.

The single is testament to how Kelly Khumalo and Mondli make an incomparable team. The two artists are particularly well matched vocally.

The Voice of Africa’s life is a consistent series of controversies. The most controversial being the murder of her baby daddy and Bafana Bafana goalkeeper Senzo Meyiwa in 2014.

Eight years after Senzo’s death, Khumalo is constantly dragged on social media. She almost always responds to her haters by releasing an album grateful to God for her victories in life.

The songstress teased Akathinthwa a couple of days after the Senzo Meyiwa trial was postponed to May 2023.

Furthermore, the season finale of her reality TV show, Life With Kelly Khumalo, saw Khumalo reconciling with her estranged sister Zandie Khumalo-Gumede after ending her friendship with her best friend Wanda Baloyi.

Most recently, the mother of two shared a picture on Instagram with what looks like a baby bump. The post sent her followers into a frenzy, speculating that she is expecting Baby No 3 with her boyfriend and former Kaizer Chiefs midfielder  Mthokozisi Vincent Yende.