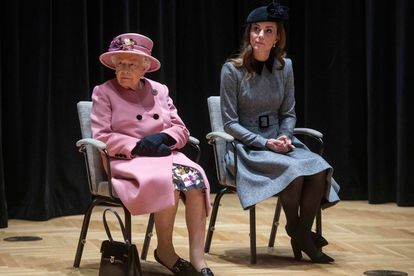 This was no doubt a very special moment for Kate Middleton. She married into the Royal Family in 2011, but the trip to King’s College in London was her first official social visit with the Queen.

No wonder everyone had an opinion when Meghan Markle went on her first official solo trip with Queen Elizabeth so soon after tying the knot with Prince Harry.

The Queen is the patron of King’s College London, and the royal women were greeted by former Prime Minister John Major when they arrived at Bush House.

Queen Elizabeth and Kate also visited one of the Roof Terraces on the eighth floor of Bush House, where they were treated to the panoramic views of London.

On the new virtual trading floor, The Queen and Kate met students from the Entrepreneurship Institute – which supports entrepreneurial thinking, skills and experiences amongst King’s students, staff and alumni.

They were both presented with flowers before they left. According to the Royal website:

“Research carried out at Kings College London have led to the developments of radio, TV, mobile phones and radar – as well as the discovery of the structure of DNA.”

Her Majesty The Queen and The Duchess of Cambridge arrive at @KingsCollegeLon to open Bush House – the latest education and learning facilities on the university’s Strand Campus. pic.twitter.com/AOGubc8BcY