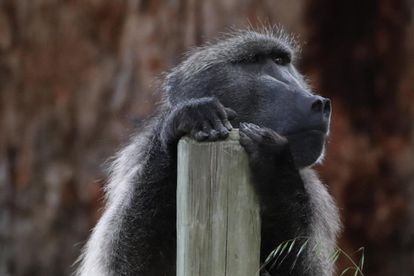 Kataza the baboon has a mate waiting in the wings. Image via Twitter @SallySivewright

Kataza the baboon has a mate waiting in the wings. Image via Twitter @SallySivewright

Recently resettled primate Kataza is to get a girlfriend after funds have been successfully raised to transport her from East London to Limpopo Province.

Cape or chacma baboon Kataza has been relocated from Cape Town to a primate rehabilitation centre in Tzaneen and his luck will be improving further.

He is on track to get a girlfriend after enough funds were raised to transport an East London-based female to the same rehabilitation centre.

Kataza made headlines over several months in 2020 when Cape Town residents petitioned for him to be relocated. Many claimed he was a danger to himself and residents.

“His life was in danger as he spent most of his time in the urban area. Residents threatened to harm and kill him, with an incident of gunshots fired at him reported to us,” the SPCA said, as quoted by IOL.

Kataza did not integrate with troops located in Kommetjie and Slangkop. As a result, Kataza became a nuisance to residents. He spent most of his time alone, foraging for food and getting intro trouble in the suburbs.

Relocation was in Kataza’s best interest, the SPCA said. The belief was he would continue to raid homes, having failed to integrate with troops in the area.

On 12 January, the Cape of Good Hope branch of the SPCA applied for a permit to have Kataza relocated to the Riverside Wildlife Rehabilitation Centre in Limpopo. Cape Nature gave the green light and issued a permit for the relocation.

“It was either Kataza went to Limpopo and spends his rest of his life in Riverside Centre in a semi-wild enclosure in time or he faced euthanasia,” Baboon Solutions founder Terry Corr said.

KATAZA TO GET A GIRLFRIEND

The relocation went well and Kataza is said to be healthy and settling in. And having a mate at the Riverside Wildlife Rehabilitation Centre would make him even happier.

The Owl Rescue Centre successfully appealed to pilots on an aviation group to volunteer their services and an aircraft towards this cause. They will transport Jacky, a 16-year-old baboon from East London, to the Riverside Wildlife Rehabilitation Centre.