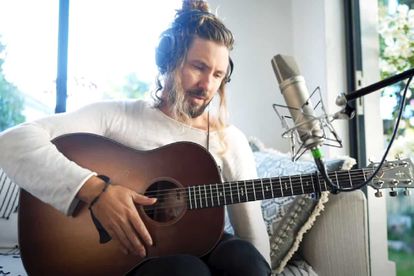 It’s reported that Jeremy has spent the last six years touring his high-energy live shows, earning him a global army of dedicated fans. Last year, he was invited to a private after-party when Ed played his first stadium show in South Africa and the pair seemingly immediately hit it off. Loops spoke to Martin Bester and his team about the collaboration:

“He (Ed) said I was a better loop artist than he is. Very kind, but not true!” Jeremy told the team. “He suggested we write together. I thought he was joking, but six months later I was in his studio on his Sussex estate and we wrote two absolute bangers, at least one of which will be on the album.”

Meanwhile, Jeremy also revealed that he signed a global deal with Universal Music.

“I’m excited to partner with Universal Music in South Africa. We’ve struck a deal where I retain ownership and ultimate control, but they bring in their years of experience, resources, and an incredible team to help me take my music further. It’s the dream situation for an independent spirit like me where a major label joins a team and shares our vision.”

Today, Jeremy shares the first track under his new licensing deal with Universal Music Group South Africa, as part of a unique global partnership with Decca Records in the United Kingdom and Polydor in Germany. Jeremy went on to perform his new single, entitled Mortal Man, for the first time on Breakfast with Martin Bester.

When the song made its debut on YouTube, Jeremy wrote :

“What a journey here. From our little rough lakeside sketch of this song when it was just a work in progress to naming a whole tour after it months before it’s come out, I’m glad to have Mortal Man out in the world and in your lives. If you have any friends or loved ones who could use this message and take some meaning from it, please share it with them.”

The modern day ‘one man folk band’ that is Jeremy Loops

Back in 2013, Jeremy spoke to The South African saying that a lot of loop artists build on single layers and they build big sounds on one layer.

“I use three different channels to do beats on the one, vocals on the one and guitar on the other so that I can take things in and out of a song. A lot of loop artists build a song up to a climax and break it down, whereas I kind of try and make songs the way that I would want to hear them. I bring the beat in and take the beat away, I bring the chorus in and take it away and that’s something that took me a while to figure out.”

The modern day ‘one man folk band’ that is Jeremy Loops also said that it feels good to represent South Africa around the world:

“I have started to warm to it. The first two years were mostly more terrifying than exciting and I only felt excited after the gig after it had gone well and then the next gig I was terrified again. I think some people were born to do this, some people grow up singing in the mirror thinking one day they are going to be on stage. I had none of that. I studied something completely different – property development and finance and then I was boating in isolation where I learnt to be on my own. All of a sudden in the last two and a half years I have really had to tap into my extroverted side and be willing to be constantly creating and constantly on the move and every week something bigger happens.”