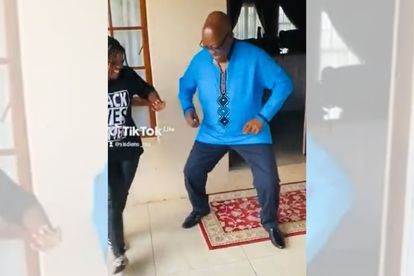 It seems almost everyone is a lover of yanos, including ex-president Jacob Zuma.

The 79-year-old former statesman went viral this week after he was seen showing off his best amapiano dance moves.

The video was posted on TikTok by a young dancer @sisdiens_rsa.

In the viral clip, Jacob Zuma is seen dancing to a popular track by Lady Du, titled uZuma Yi Star.

The song is dedicated to the ex-president and features the lyrics “Msholozi”, referring to the retired politician’s nickname.

The young dancer attempts to teach Zuma some of the popular dance moves – but to no avail. Instead, he is heard bursting into laughter as he shows off his own rendition of dance moves.

On Twitter, the clip was shared by the ex-president’s daughter Duduzile. She tweeted: “Retirement looks good on you. Thank you Mmamodiehi AKA Majaivane for keeping dad dancing”.

It’s not the first time we’ve seen Zuma bust a dance move on social media and entertain the masses.

ALSO READ: Not all bad: Pupil puts a smile on teacher’s face with dance moves [watch]