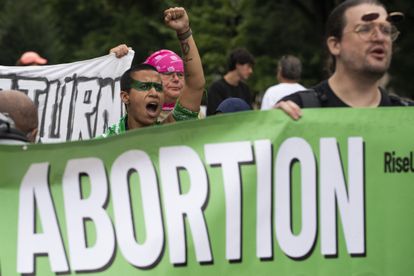 The White House on Saturday assailed Indiana lawmakers for passing sweeping curbs on abortion access, calling it “devastating” step for the Midwestern state.

Indiana on Friday became the first state to pass such a law since the Supreme Court in June struck down the constitutional right to an abortion, originally affirmed in the landmark Roe v. Wade case.

“The Indiana legislature took a devastating step as a result of the Supreme Court’s extreme decision to overturn Roe v. Wade and eliminate women’s constitutionally-protected right to abortion,”

ALSO READ: US women jump to contraceptives after abortion ruling

“It’s another radical step by Republican legislators to take away women’s reproductive rights and freedom, and put personal health care decisions in the hands of politicians rather than women and their doctors.”

Both houses of the Republican-dominated Indiana legislature passed the abortion measure on Friday after weeks of bitter debate, and Governor Eric Holcomb, a Republican, quickly signed it.

When the measure takes effect Sept. 15, it will allow abortions only in cases of rape, incest, lethal fetal abnormality or when a pregnant woman faces the risk of death or severe health problems.

Alexis McGill Johnson, president of the Planned Parenthood Federation of America, which advocates for abortion rights, called the law “cruel” and “devastating.”

Jean-Pierre, in her statement, said Congress should “act immediately to pass a law restoring the protections of Roe – the only way to secure a woman’s right to choose nationally.”

Until then, she said,

While some conservative states earlier this year had preemptively passed “trigger” laws to immediately prohibit abortion once the Supreme Court acted, Indiana lacked such a law.

Abortion there had been legal up to 22 weeks. It was to state capital Indianapolis that a 10-year-old girl, victim of rape, had traveled for an abortion when unable to obtain one in neighboring Ohio.

Abortion has long been deeply divisive in the US, and the Supreme Court’s decision ensured its centrality in the political debate ahead of midterm elections.

Democrats, who say the Supreme Court is seriously out of touch with the national mood, have seized on the result of a vote Tuesday in heavily conservative Kansas, which chose overwhelmingly to preserve that state’s constitutional protection of abortion rights.