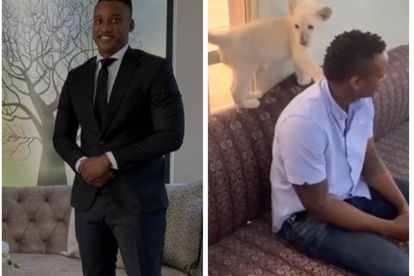 Social media users were scared on Duduzane Zuma’s behalf when a video of him chilling with a white lion cub webt viral. Image via @duduzanezuma_official @winstoninnes/Instagram

Social media users were scared on Duduzane Zuma’s behalf when a video of him chilling with a white lion cub webt viral. Image via @duduzanezuma_official @winstoninnes/Instagram

While it is not clear if the video was shot in South Africa or Dubai, some believe it could have been in the United Arab Emirates (UAE). However, keeping a wild animal as a pet was outlawed in the country in 2017, according to BBC. But what does the South African law say?

ALSO READ: Cat’s out of the bag: It’s surprisingly easy to own a pet tiger in Gauteng

DUDUZANE HANGS OUT WITH THE KING OF THE JUNGLE

The son of the former South African president, Jacob Zuma, did not seem fazed when a white lion cub moved slowing and graciously behind him as he chilled on a coach in what looked like a lounge or reception area.

The short clip of Duduzane was shared by his friend @winstoninnes who captioned the video, “Future President the odds are against them!!!”

IS KEEPING A LION CAPTIVE ILLEGAL IN SA?

With that announcement, the government resolved to stop issuing permits to breed, hunt, keep, or interact with captive lions and had said it would be revoking existing breeding permits.

At the time, it was estimated that there are between 6000 and 8000 captive lions in private facilities throughout the country, but Ian Michler, the director of Blood Lions — a South African nonprofit dedicated to ending the captive lion industry — said there may be as many as 12000.

In light of the law, if the video of Duduzane was shot in South Africa, it is probably old.