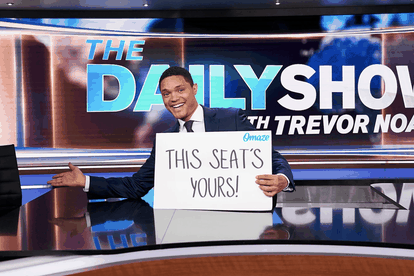 He’s interviewed presidents, Hollywood stars and award-winning entrepreneurs. And now, you get a chance to sit opposite the comic on the set of The Daily Show.

This opportunity is part of fundraising effort for the Trevor Noah Foundation which focuses on equipping underserved youth in South Africa.

In this hilarious clip, Noah even extends the invite to President Donald Trump:

Here’s how to ‘win’ an interview with Trevor Noah

To enter, you need to donate money which equates to an entry to the sweepstakes.

If your entry is selected as the winning one, it means that you and a partner will be flown out to New York, and given accommodation at a 4-star hotel.

The conversation with Trevor may be one-on-one but you and your guest will get plenty of other memorable occasions.  You’ll both be get to sit in on the writer’s room as they prep for the show and take home one copy of that day’s script signed by Trevor. You’ll also get to have lunch with the show’s staff, correspondents and crew, plus play with The Daily Show dogs.

Proceeds from entry donations will support the Trevor Noah Foundation’s recent partnership with the Young African Leaders Initiative. The two organisations are behind Education Changemakers.

They describe this as “a program which acknowledges the critical role educators play in inspiring and cultivating our next generation of leaders in the education sector.” Fifty young leaders from across southern Africa will be selected to participate in the program’s intensive leadership training and post-graduate mentoring which aims to empower them with the skills, attitudes and networks needed to elevate their contribution to a better Africa.