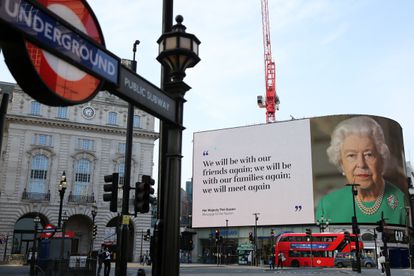 An image of Britain’s Queen Elizabeth II making her her address to the UK and the Commonwealth in relation to the coronavirus epidemic is displayed on the advertising boards at Piccadilly Circus in central London. Photo AFP/ISABEL INFANTES

An image of Britain’s Queen Elizabeth II making her her address to the UK and the Commonwealth in relation to the coronavirus epidemic is displayed on the advertising boards at Piccadilly Circus in central London. Photo AFP/ISABEL INFANTES

In years passed, the British Royal Family would spend Easter weekend at Windsor Castle. They would attend church service at St George’s Chapel, followed by a private lunch.

This year, however, things are a bit different and people all over the world spent the holiday apart. The Royal Family was no different.

Here’s what the Royals got up to over Easter

The Duke and Duchess of Cambridge – Prince William and Catherine – joined the Queen in sending messages of encouragement to the public.

They wished netizens and citizens alike a “safe and happy Easter”. They included the egg and bunny emojis for good measure, as well as the StayHomeSafeLives hashtag.

Sharing a somewhat similar photo, the Duke and Duchess of Cornwall – Prince Charles and Camilla – invited netizens to listen to the prince’s reading of the Gospel, hosted online by the Westminster Abbey and Canterbury Cathedral.

Prince Charles recorded a reading of John 20:1-18, which relates the story of Jesus’ resurrection.

An extract from The Queen’s Easter message. . The Queen speaks of light overcoming darkness, and the hope that Easter symbolises, in a special message recorded to mark the Easter weekend.‬ ‪ . Head over to our IGTV channel to listen to Her Majesty’s message in full.

When Queen Victoria was young, her mother would hide painted eggs for her. Princess Victoria of Kent wrote in a letter dated 1833 that stated that “Mamma did some pretty painted and ornamented eggs and we looked for them”.

Victoria continued the tradition for her own children when she became Queen. In another letter, written in 1843, she wrote that her husband, Prince Albert, “hid some coloured Easter eggs in the moss for the children”, adding:

“It is not so many years ago that I used so to enjoy hunting for and finding Easter eggs”.

? Did you know that Queen Victoria and her family enjoyed Easter egg hunts each year? . Find out more in today’s story, which includes a link to online learning resources for those who are at home with little ones. . Image: Royal Collection Trust / © Her Majesty Queen Elizabeth II 2020

What was on the Royal menu?