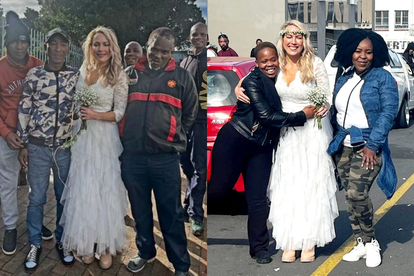 This beautiful bride was treated to an extra special wedding by complete strangers. Image via Facebook @NinaSteiningerCollins.

This beautiful bride was treated to an extra special wedding by complete strangers. Image via Facebook @NinaSteiningerCollins.

Having a Home Affairs wedding doesn’t have quite the same feel as a big celebration with flowers cake and a ton of friends and family to witness your union. Despite this, more and more couples are making the decision not to spend thousands on a dream wedding so that the money can rather be used elsewhere. One woman and her partner made this decision recently – instead of the quiet wedding she was expecting, she was treated to many beautiful compliments and fun photo opportunities by strangers near the Home Affairs building who couldn’t help but gush over what a beautiful bride she was.

Various photos of her posing with the strangers have since circulated online as Mzansi weighed in on the beautiful little “street wedding”.

South Africans can be faulted for many things but one thing they really seem to always have is the spirit of Ubuntu.

Quite a few locals showed a dazzling display of what Ubuntu truly means after they helped make a Cape Town woman’s wedding just a little bit better with their excitement about her union.

Heading to Facebook’s ImStaying page, Nina Steininger gushed over the number of people who stopped her outside the Wynberg Home Affairs to ask for a snap of her in her wedding dress before and after saying ‘I do’ to her partner.

“Got married at Home Affairs in Wynberg recently and was blown away by the ‘gees’ and well-wishes of complete strangers that spread great vibes along my way to the centre. What a send-off!” she captioned the beautiful wedding photos.

“Nina Steininger Collins I don’t know if you are a Sex and The City fan but this reminds me of when Carrie got married to Mr. Big. They also did it at the office.”

“Spirit of ubuntu lives within us BLACK PEOPLE”