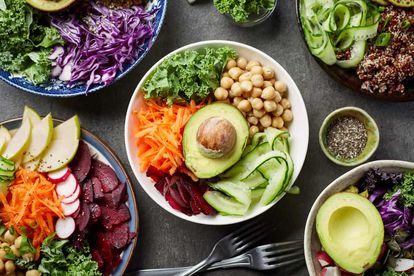 Whether you plan to continue with just Meat-Free Mondays, or select one meal a day to eat vegan — or make a full transition, you’ll need support and inspiration to keep up this lifestyle.

Consider joining the Facebook group for the South African Vegan Society. Formed in 2007, the registered non-profit organisation is the primary vegan outreach organisation in the country.

Their goal is to promote the ethical, environmental and health advantages of vegan living through online activity and resources, events, product endorsements, products and literature.

They also have community specific groups for vegans in Cape Town, East London, Johannesburg and KwaZulu-Natal.

If finding appropriate recipes is a major challenge for you, these websites have a range of suggestions — from classic meals to egg-free baking to yummy meat replacement options:

Taking place at the Cape Town International Convention Centre (CTICC) on 30 and 31 May 2020, the first Vegan & Plant Powered Show aims to bring what was previously considered a fringe diet of veganism, as well as plant-based and conscious living to a mainstream audience.

The two-day event will feature international and local celebrity cooks and chefs presenting live demo. There will also be over 120 exhibitors showcasing the very latest food and drink products, to lifestyle brands in the vegan and plant-based industries.

Check out the A Word on Veganism podcast for a specifically South African take on a meat-free diet.

The host, Andy Leve, describes himself as a “flexitarian”, and facilitates conversations about the important dietary aspects to consider, to making a safe and sustained switch as well as managing the social aspects for managing the change.

Episodes so far include a discussion with dietician Lila Bruk and endocrinologist Dr Brad Merwitz on the nutritional aspects to consider before making a lifestyle switch, and a chat about environmental sustainability with Taryn Mansfield from The South African Vegan Society and Kevin Coetzee from Infinite Foods.

Leve also discusses how to maintain your new lifestyle with author, chef and restauranteur at Leafy Greens Antonia de Luca and The Veganist owner Zachda Prinsloo.

What to look out for on the shelves

Eating vegan doesn’t mean having to give up on all the foods you love. Here are some options to include in your trolley:

Our recommendation for hassle-free vegan foods

You can stock up on a lot of these and stick them in your cupboard or freezer compartment:

Potato hashbrowns
Stick ’em in the toaster and serve with your beans.

Soups
Ready-made soups are so comforting, quick and easy.

Pizza
Fry’s has frozen wood-fired vegan pizzas! You can get them in Smoky BBQ and Mediterranean flavours. Or go to the ‘choose your own topping’ section of your supermarket and ask for a pizza without cheese. (You can add your favourite vegan alternative later!)

Plant-based meat alternatives
Burgers, sausages, pies, nuggets – they can all be quickly and easily cooked in the oven.
Pasta
Most dried pasta is vegan. Keep it simple by topping with chopped tomatoes or a vegan pesto.