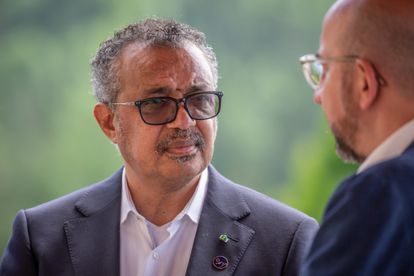 European Council President Charles Michel and the Director-General of the World Health Organization (WHO) Tedros Adhanom Ghebreyesus talk prior a bilateral meeting at the G7 summit at Elmau Castle, southern Germany, on 27 June 2022. – The Group of Seven leading economic powers are meeting in Germany for their annual gathering from 26 to 28 June, 2022. Photo: Michael Kappeler / POOL / AFP

European Council President Charles Michel and the Director-General of the World Health Organization (WHO) Tedros Adhanom Ghebreyesus talk prior a bilateral meeting at the G7 summit at Elmau Castle, southern Germany, on 27 June 2022. – The Group of Seven leading economic powers are meeting in Germany for their annual gathering from 26 to 28 June, 2022. Photo: Michael Kappeler / POOL / AFP

The World Health Organization will reconvene its monkeypox experts to decide if the worsening outbreak now constitutes a global public health emergency, its chief said Wednesday.

The UN health agency’s director-general Tedros Adhanom Ghebreyesus said he would hold a second meeting of the emergency committee on monkeypox, with more than 6,000 cases now confirmed in 58 countries.

A surge in monkeypox infections has been reported since early May outside the West and Central African countries where the disease has long been endemic.

“I continue to be concerned by the scale and spread of the virus,”

Tedros told a press conference from the WHO’s headquarters in Geneva.

“Testing remains a challenge and it’s highly probable that there are a significant number of cases not being picked up.

“Europe is the current epicentre of the outbreak, recording more than 80 percent of monkeypox cases globally.”

Most monkeypox infections so far have been observed in men who have sex with men, of young age and chiefly in urban areas, according to the WHO.

On 23 June, the WHO convened an emergency committee of experts to decide if monkeypox constitutes a so-called Public Health Emergency of International Concern (PHEIC) — the highest alarm that the WHO can sound.

But a majority found the situation had not yet crossed that threshold.

“My teams are following the data. I plan to reconvene the emergency committee so they’re updated on the current epidemiology and evolution of the monkeypox outbreak, and implementation of counter measures,”

“I will bring them together in the week of July 18 or sooner if needed.”

ALSO READ: This is how sperm can be a vehicle for monkeypox infection: Experts

The WHO’s 16-member emergency committee on monkeypox is chaired by Jean-Marie Okwo-Bele from the Democratic Republic of Congo, who is a former director of the WHO’s Vaccines and Immunisation Department.

There have been six PHEIC declarations since 2009, the last being for Covid-19 in 2020 — though the sluggish global response to the alarm bell still rankles at the WHO’s headquarters.

A PHEIC was declared after a third emergency committee meeting on January 30 that year. But it was only after 11 March, when Tedros described the rapidly worsening situation as a pandemic, that many countries seemed to wake up to the danger.

The normal initial symptoms of monkeypox include a high fever, swollen lymph nodes and a blistery chickenpox-like rash.

Initial outbreak cases had no epidemiological links to areas that have historically reported monkeypox, suggesting that undetected transmission might have been going on for some time.

The WHO’s current plan to contain the spread focuses on raising awareness among affected population groups and encouraging safe behaviours and protective measures.