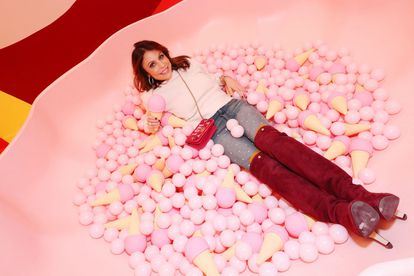 The former Real Housewives of New York City star uses a weighted blanket while she sleeps that causes her to wake up sweating so much that she feels like she’s done a workout.

In an episode of Yahoo’s The Unwind series, she said: “I have not exercised. I have now convinced myself that sleep is exercising. I sleep with my weighted blanket, and I use a much, much heavier one than you’re supposed to.

“I didn’t know that, but I guess [the weight should be] according to a certain percentage of your body weight. I keep telling people, and no one will agree with me, but I feel like sleep is exercise. I’ve been sleeping well and I wake up sweating so I’ve convinced myself that that’s exercise.”

Elsewhere, the 50-year-old TV personality admitted she doesn’t like to wear make-up, unless she is being paid, while she hates feeling like she has to compete with others who are glammed up on social media.

‘Only when I get paid’

“I want to wear a sign saying, ‘I’m not wearing any hair and make-up and I’m not filtering my photos’ so I don’t know how to compete with everybody else making their waist be 21 inches, and no wrinkles, and the filters. I want my Instagram account to say, ‘Guess what, I don’t wear hair and make-up very often’.”

Meanwhile, Bethenny recently revealed she’s opted to ditch meat in solidarity with her 10-year-old daughter Bryn – whom she has with her ex-husband Jason Hoppy – who has asked to take up a vegetarian diet because she “loves animals”.

Bethenny wrote: “Bryn wants to be a vegetarian because she loves animals, so she’s asked me to do it with her. I used to eat this way, so let’s see how it goes.”