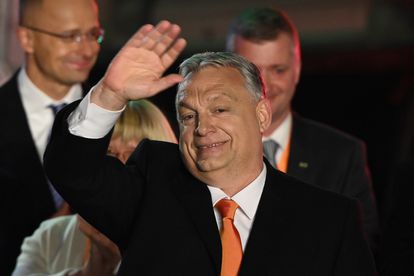 Hungarian Prime Minister Viktor Orban and members of the Fidesz party celebrate on stage at their election base, ‘Balna’ building on the bank of the Danube River of Budapest, on 3 April, 2022. Photo: Attila KISBENEDEK / AFP

Hungarian Prime Minister Viktor Orban and members of the Fidesz party celebrate on stage at their election base, ‘Balna’ building on the bank of the Danube River of Budapest, on 3 April, 2022. Photo: Attila KISBENEDEK / AFP

Hungary’s Prime Minister Viktor Orban is an ally of Vladimir Putin and he has taken a leaf out of the Russian president’s book in attracting major sporting events to boost his image among his people.

On Friday Orban — who was elected to a fourth term in office in April as his nationalist party Fidesz won with a thumping majority — will proudly see the Giro d’Italia, one of cycling’s main tours of the season, set off from Budapest.

In June the world swimming championships returns to town — having already been hosted there in 2017 — and next year the world athletics championships will take place in the Hungarian capital.

The athletics venue is presently under construction and will have a permanent capacity of 15 000 but for the world championships will surge to 34 000 with the use of temporary seating.

ALSO READ: Amber Heard calls Johnny Depp ‘love of my life’ as she testifies in court

Hungary will also host the handball European Championships in January.

And last year four games in the Euro 2022 tournament were played in Budapest. Those matches were overshadowed by racial abuse from Hungarian supporters that led to UEFA imposing a fine of 100 000 euros (about R1.7million fine) and ordering three games, one of which was suspended, to be played behind closed doors.

Orban, who has been in power since 2010, has plenty of detractors internationally, not least the European Union, who have accused him of democratic backsliding.

The European Commission announced earlier this year it was launching a never-used procedure against Budapest that could see its EU funding cut for flouting democratic standards.

Along with minority rights, Brussels is particularly concerned about a deterioration of media diversity and corruption in Hungary.

However, such concerns have not stopped Orban attracting top-calibre sporting events.

“Even if it does not do much to boost his image abroad, it is a tool to legitimise his authority, and to justify the importance of his regime,”

Lukas Aubin, associate researcher at Paris’s Institute for International and Strategic Affairs (IRIS), who specialises in the geopolitics of sport and Russia, told AFP.

The comparisons with Putin are clear. The Russian president managed to bring both the global sporting showpiece events — the now infamous doping-tainted 2014 Sochi Winter Olympics and the 2018 World Cup — to Russia.

“In Russia, the image of the president (Putin) was not strengthened abroad but it served a purpose internally,”

Putin’s favoured sport is judo and he was Orban’s guest of honour at the 2017 world championships.

Whether Orban took the time to ask Putin the secret behind his country’s successful bids for the Olympics and the World Cup, the Hungarian premier has made no secret of his desire to host the former one day.

In a rare example of bowing to popular opposition during Orban’s time in power, Budapest withdrew its bid to host the 2024 Olympics after 266 000 citizens signed a petition opposing the bid, organised by opposition movement ‘Momentum’.

However, the 58-year-old strongman believes with a growing number of state-of-the art stadia the chances of Budapest hosting the Olympics one day is growing.

Last August he told sports daily Nemzeti Sport — in which he features regularly — after assessing Tokyo’s hosting of the Games “it is more and more evident each year that Hungary is worthy of hosting the Olympics.

“That possibility is far off for the moment. However, hosting the Olympics is an ever present dream for Hungarians, an everlasting love.”