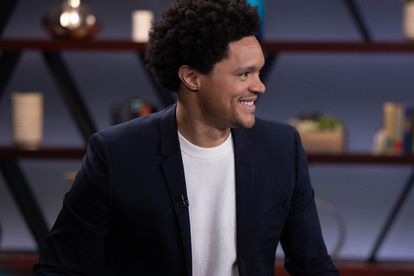 Trevor Noah has revealed the real reason he is growing his afro.
Image via Twitter
@trevornoah

Trevor Noah has revealed the real reason he is growing his afro.
Image via Twitter
@trevornoah

Americans are seeing a totally different Trevor Noah to the one we’re used to seeing – and it has everything to do with his afro hairstyle.

The South African born comedian has grown his hair since the start of the pandemic in 2020, and has not looked back since.

On Monday 18 April The Daily Show host discussed his luscious locks with the audience in between filming the show.

TREVOR NOAH ON WHY HE GREW HIS HAIR

Trevor Noah revealed that he chose to grow his hair during lockdown in 2020, rather than cut it himself.

But after the world began to open up again amid the pandemic, he decided not to go back to his signature short hairstyle. Instead he has learned to “appreciate” his afro.

He added: “My head is never hot or cold anymore”.

Of another afro advantage, Trevor Noah revealed his hair actually saved the day when he decided to move his TV and it slipped and fell.

He continued: “It just sat on my head. It didn’t crack , it didn’t break, it didn’t dent”.

But the biggest pro for his growing mane is Trevor’s ability to now compete with his mother Patricia Noah.

He told the audience: “When I go to South Africa I can finally challenge my mom in bucket carrying contests.

“When we were kids – and she still does it now – my mom would carry  heavy, heavy, heavy buckets of water. She would put the bucket on her head and just walk”.

Admitting that he couldn’t do it because it “hurt” his head, Trevor claimed his mom used to tell him to “stop being a baby”

But Trevor is now ready to take on bucket and the big boys. He added: “When that TV hit, I was like; ‘I’m coming for you mom’”.