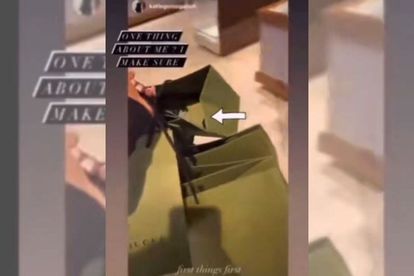 If you thought the “Fake Gucci” spotter’s claims were an eye-opener, wait till you get a load of this one!

According to claims by a South African TikTok user, a local Gucci store is allegedly allowing shoppers to pay a significant amount of money to take pictures of themselves posing with empty shopping bags from the luxury store.

According to claims by TikToker @avril_albetti, the Gucci store at the V&A Waterfront in Cape Town is allegedly allowing people to pay R1 000 to pose with empty shopping bags from their store.

The TikTok video shows a shop assistant handing shopping bags to a customer. Towards the end of the video, the TikToker points out that one of the shopping bags is empty. It is unclear, however, whether the other shopping bags are empty or not.

The TikToker’s caption reads: “Gucci, I’m disappointed that you entertain this mess for Instagramers selling dreams.”

The video has since gone viral on TikTok and has been viewed more than a million times.

After first stating that the Gucci store in question was Sandton City, Johannesburg, the TikToker then corrected herself after multiple comments saying it was the store at the V&A Waterfront.

Buying empty shopping bags and boxes from high-end fashion brands seems to have become a worldwide trend among mostly influencers however. One can even find shopping bags from the likes of Gucci, Dior and Chanel for sale on eBay.

According to an article published by Briefly in January this year, a Twitter user had also shared information about an Instagram boutique that makes money from selling Gucci and Louis Vuitton packaging.

One Twitter user reacted to the tweet, claiming that it is easy to hire wigs, iPhones and Champagne bottles. The tweep also claimed that you can even hire houses for lavish Instagram photos!

The “Fake Gucci” spotter caused quite the commotion amongst Mzansi celebs. The likes of Somizi, Mampintsha, Shaun Stylist and businesswoman Shauwn Mkhize have all been nabbed by the Instagram account.

To prove he didn’t own any counterfeit Gucci items, Somizi took a trip down to the luxury store and had the shop assistant pull up a record of everything he has bought from the store. The digital receipt included the bucket hat he was called out for.

The South African made several attempts to reach the V&A Waterfront Gucci store for comment about the TikToker’s claims, but the store’s phone just rang unanswered.