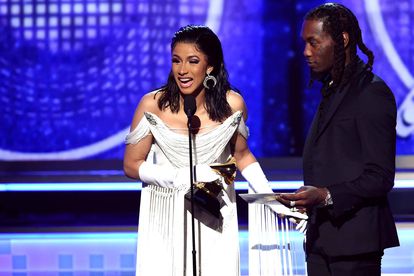 She’s brash, she’s loud, and America is all in for her special brand of sass, from online feuds to strip club brawls.

But when Cardi B accepted her first Grammy award — making rap history in the process — the 26-year-old had the crowd falling in love with her softer side.

Cardi B carves her name in music history

On Sunday night in Los Angeles, the unstoppable Bronx native cemented her spot in the upper echelons of hip-hop as the first woman solo artist to win a Best Rap Album Grammy.

And she accepted the trophy with signature, unfiltered charm.

“The nerves are so bad. Maybe I need to start smoking weed,” she quipped, to laughs and applause from the glitzy gala set.

Visibly shaking, she spoke of the odds being stacked against her as she raced to complete her debut album “Invasion of Privacy” while pregnant with her first child.

She clutched her rapper husband, Offset, later turning to him: “You husband, thank you.”

The touching vignette was a far cry from the larger-than-life image of the reigning queen of rap, who had earlier gyrated through a sexually-charged performance in leopard thigh-highs and peacock-style feathers.

Who is Cardi B?

Born Belcalis Almanzar to a Dominican father and Trinidadian mother, Cardi B’s unchartered rise to fame sparked during her days as a stripper, when she carved out a social media personality on platforms including Instagram.

Posting videos that saw her wax poetic on everything from cheating lovers to the qualities of the pancake chain restaurant IHOP, Cardi snagged a spot on the reality series “Love & Hip Hop,” further amplifying her image.

“Hey, America, washpoppin’?” she said in her intro video for the show.

“You might know me as that annoying dancer on social media that be talking hella crazy, with the long nails and the big ol’ titties, but I’m just a regular, degular, shmegular girl from the Bronx.”

And thus the New Yorker began clocking her rapid ascent to stardom: as her profile grew, Cardi in 2015 gave up stripping to give rap a go.

The road to the seat of the queen of Hip-Hop

It was a bold gamble given her lack of experience, but her love of spectacle and fast-talking style helped ensure it paid off.

After releasing a few mixtapes she found runaway success with her breakthrough 2017 megahit “Bodak Yellow” — a foreboding track with skittering beats whose lyrics revolve heavily around her stripping past.

The song smashed the charts, overtaking pop princess Taylor Swift to snag number one on the Billboard Hot 100 — the first woman rapper to take the top spot since legend Lauryn Hill did so in 1998.

The internet celebrity turned bonafide rap star then dropped her album “Invasion of Privacy” — the work that captured this year’s top rap Grammy — in 2018 to critical and commercial acclaim, assuring Cardi a seat at the table in the male-dominated world of hip-hop.

Despite her stream-of-consciousness style on social media, Cardi has proven a sharp student of the rap game, prioritizing the formal aspects of writing and studying the work of her predecessors.

She stacked “Invasion of Privacy” with A-list collaborators: Chance the Rapper, R&B star SZA and Offset’s rap trio Migos are among the guest performers.

Her saucy dance hit “I Like It” soundtracked the summer while nodding to her Latin roots: the track features reggaeton stars Bad Bunny and J Balvin, layering bilingual raps over the vamping piano of boogaloo musician Pete Rodriguez’s 1968 hit “I Like It Like That.”

And if proof were needed of her place in the pop culture pantheon, Cardi B’s signature “Okurrrr” call was the centerpiece of Pepsi’s latest Super Bowl ad, in which she starred complete with crystal-encrusted manicure.

An outspoken star with a penchant for drama, Cardi’s on again, off again romance with husband Offset provides regular tabloid fodder.

But she wastes little time on the tribulations of love: the superstar favors the themes of proud women — and money.

“I like boardin’ jets, I like mornin’ sex,” she raps in her current hit “Money,” which she performed at the Grammys on a rhinestone-encrusted piano.

Her risque video for the track wowed the internet for scenes that show Cardi breast-feeding, pole-dancing and playing the piano naked, as women shower other women in cash.

The rapper is also unabashed when it comes to politics, recently unleashing a vulgar rant slamming Donald Trump for the US government shutdown.

Cardi B has hinted she will drop a new album in 2019, capitalizing on a year of runaway success.

But no matter what comes next, there is little doubt Cardi from the Bronx will keep building her brand where she began: speaking to her fans directly, and keeping it real.