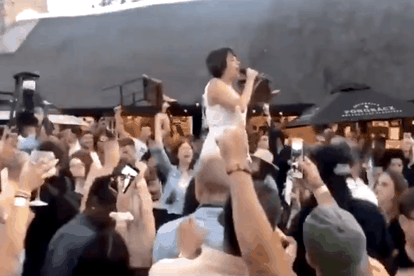 Electronica outfit GoodLuck has issued an apology on Monday, after they were caught up in a serious breach of COVID-19 protocols. The band was performing at La Parada in Constantia, Cape Town over the weekend – where a number of partygoers crammed themselves onto the dancefloor and ignored the health and safety guidance.

The musicians have been heavily blamed for their part in the jaw-dropping scenes, which were amplified when a viral video of the event spread like wildfire across social media. However, they claim that the clip is largely taken out of context, and that those in attendance had only got out of their seats ‘for the last song of their set’.

Nonetheless, the latest post on GoodLuck’s Facebook page shares an ‘unreserved apology’ for the incident. The band also confirmed that their upcoming gigs at the Get Lucky Summer event will now be postponed, and those who need a refund will be updated on how they can claim their money back on Tuesday 15 December.

“Last night we performed at an event that was hosted and run by La Parada, a venue in Cape Town. Since then a video has been circulating of an unmasked crowd dancing to our music with Jules singing on a table – and we would like to unreservedly apologise for how it looked and the part that we had to play in that situation.”

“We have been informed that customers were supposed to have stayed at the tables and not move around throughout the event. These rules were largely adhered to until the last three minutes (the final song) of our show where during this song everyone got very excited and started to jump around between the tables as seen in the video.”

“We should have stopped the music and instructed everyone to go back to their tables but we were right at the end of the show mid song, but the moment got a away from us. For this, we do sincerely apologise. With this in mind we have decided to cancel our Get Lucky Summer concerts that were due to take place this December.”

You can view their full statement here:

We would like to offer our sincerest apology to all of our fans, friends and family. We had nothing but the best of intentions going into Sunday's performance & we are bitterly disappointed that things got out of control for even 1 minute. Its a massive reminder to stay vigilant. pic.twitter.com/BX94v0Mev0