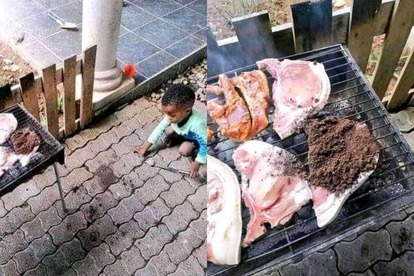 This little boy added some sandy spice to the braai meat. Images via Twitter: @YeezyLufuno

This little boy added some sandy spice to the braai meat. Images via Twitter: @YeezyLufuno

A little one has left Mzansi laughing out loud after a tweep shared some snaps of him adding a special ingredient to the family’s braai meat. In the snaps, the bundle of joy can be seen digging up some sand before he dumped a whole pile of it on a piece of raw steak. Naturally, locals were making jokes galore about the sandy braai.

In the pictures posted by @YeezyLufuno, the toddler can be seen digging a sandpit right next to the braai. We guess it wasn’t smelling like what he was normally used to.

So he decided he could do a better job by adding his all-natural flavors. These included the likes of sand, cement, and possibly earthworms directly onto the meat.

The picture posted by @YeezyLufuno simply captured guys ”crying face emoji” had Twitter users beside themselves with laugher. Many of them started offering advice. One hilarious user suggested:

“They should’ve given the guy spices, they really learn fast.” and another user jokingly commented, “bundle of sadness.”

Mzansi is dying from laughter

Some users wondered what the parents’ reaction to their sandy dish was with one commenting “I wonder what happened after this picture was taken.”

@chaungeni1 reminded South Africans how expensive meat is by replying with “That steak alone costs R100 in PicknPay.”

While whatever the reason behind the toddler’s decision to spice the braai, two thinks are are sure. One, he is fearless and two, he will never be left alone again, at least not until December is over.

And as for Twitter users, while we were left with a good laugh.