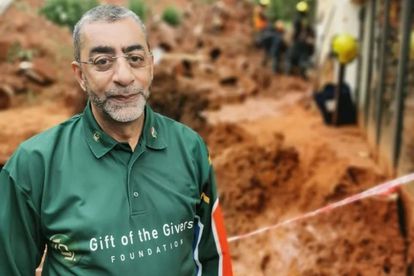 South Africans are praising Gift of the Givers founder Imtiaz Sooliman and his team for his work assisting victims of the KwaZulu-Natal floods from Day 1.
Image via Facebook
Gift of the Givers

South Africans are praising Gift of the Givers founder Imtiaz Sooliman and his team for his work assisting victims of the KwaZulu-Natal floods from Day 1.
Image via Facebook
Gift of the Givers

The majority of South Africans are placing their trust in the non-profit humanitarian organisation Gift of the Givers as opposed to government authorities following the devastation of the KwaZulu-Natal (KZN) floods.

Upon news that the Department of Human Settlements has set aside a R1 billion disaster relief fund to aid victims, social media users are having their say. And many have expressed their concern about the money being looted by public servants.

In safe hands: Give money to Gift of the Givers

They’re also demanding that Gift of the Givers founder Imtiaz Sooliman be tasked with appropriating the money.

This, after KZN’s Cooperative Governance and Traditional Affairs Department took to Twitter over the weekend to appeal to South Africans to donate to flood relief efforts.

According to City Press, the University of Johannesburg (UJ) has launched a relief fund to aid KZN flood victims. However, the university’s council reveals that the R120 00 raised thus far will go to charity Gift of the Givers as opposed to the government.

Vice chancellor Tshilidzi Marwala said: “If we invest in the rebuilding of KwaZulu-Natal, all of us win. The humanitarian aspect of the disaster is too hard to ignore”.

Asked why UJ chose to donate the money directly to the charity, he said: “People will ask why them, and the reason is very simple. We don’t believe that government has the capacity to handle funds. This is from the lessons we learnt from the disappearance of COVID-19 funds. So, Gift of the Givers, as a trusted entity, would be a good one”.

On Monday 18 April, Independent Freedom Front (IFP) leader Velenkosini Hlabisa also handed over R250 000 to Gift of the Givers. He told City Press: “They have sufficient infrastructure to reach every part of eThekwini”.

ALSO READ: ‘No room for corruption’ – Ramaphosa on funds availed for KZN floods

TWEEPS PRAISE GIFT OF THE GIVERS

Meanwhile Twitter users have sided with the opinions of UJ and have called on the president to rope in Gift of the Givers to handle the disaster relief fund.

Gift of the Givers have been on the ground since last week, assisting communities in need.

“What if the R1bn meant for #KZNFloods were given to Dr Imtiaz Sooliman and Gift of the Givers. I mean Dr Sooliman has an impeccable record of handling public funds and responding to disasters. Not just in SA but the world over.”

“People of KZN should demand that all donations are channeled to Gift of the Givers. That’s the only way people will be able to rebuild their lives. Comrades are eyeing the emergency funds in KZN”

“Gift of the Givers can manage those funds, no to ANC”

“Dr Imtiaz Sooliman for president. His operation is going above and beyond”

“I would rather send my donations to the Gift of the Givers, people who have a good track record of assisting in disasters than donate to ANC looters’ connected project. I bet those funds are already depleted even before reaching #KZNFloods’ victims”

IMTIAZ SOOLIMAN: ‘I DON’T HAVE ANY MATERIALISTIC THOUGHTS OR DESIRES’

Meanwhile, comments made by Gift of the Givers founder Dr Imtiaz Sooliman have re-emerged.

Speaking to News24 in 2019, the former doctor revealed the charity was formed in 1992 in after Turkish Sufi spiritual master Muhammad Safer Efendi gave him “strict” instructions to do so.

He added: “You will not expect anything in return – not even a thank you.”

Gift of the Givers spread wings to Ukraine

Sooliman – who has also recently aided the people of Ukraine with relief efforts – spoke to 702 in 2018 about his own personal life.

He said: “I have no pension plan, because I don’t have much earnings. My father told me I’m crazy. He’s passed on now, but several years ago he told me ‘I’m proud of you’”.

He continued: “I’m a very simple person, I don’t have any materialistic thoughts or desires. I had a good practice, I changed cars six times in five years. I travelled overseas. Nothing of those kinds of things interest me anymore.