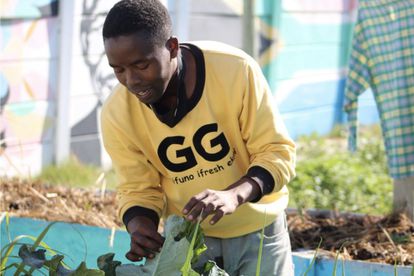 Ludwe Qamata, known as Ghetto Gardener helps out senior citizens in Khayelitsha to grow their own vegetables.

Ludwe Qamata, known as Ghetto Gardener helps out senior citizens in Khayelitsha to grow their own vegetables.

Affectionately known as the Ghetto Gardener, Qamata says farming and gardening have been his passion since he was a little boy when he used to help his grandmother plant vegetables in their yard in the Eastern Cape.

ALSO READ: Here’s a look at what the unemployed youth in SA is up to

Growing up in a financially unstable home, Qamata said vegetables helped provide food to the family, which is something that is still happening today as he lives with his aunt.

Qamata spent a few years in prison. During this time he nurtured his gardening skills. After he was released, he started gardening again.

He did a number of courses related to agriculture that helped improve his knowledge.

He now works at the Sinovuyo Senior Club in Ilitha Park, Khayelitsha, where he teaches seniors how to garden.

Qamata says they want to expand their garden and teach youth.

One of the seniors who has successfully started her own garden at home under Qamata’s teachings, is 74-year-old Christina Dlula.

She says gardening has always been therapeutic for her, even before she retired.