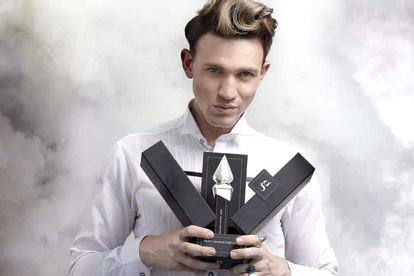 Coetzee first started out as a designer in 2006 when he won an award for most promising young designer at the age of 19.

He then began collaborating with media mogul Bonang Matheba, designing her outfits for red carpet events and award ceremonies. Miss Universe Zozibini Tunzi’s outfit to the State of the Nation Address (SONA) worn to parliament in Cape Town last month was designed by Coetzee.

The name of the fragrance was picked to pay homage to Coetzee’s home town of Rustenburg in the North West which is surrounded by platinum mines.

“I wanted a scent to really reflect who I am as a designer. And also to reflect what couture is,” Coetzee told The Sowetan.

“I’m known for red carpet gowns and really elaborate clothes, but you can’t really wear those every day, so I created a couture fragrance. So, you can think of the fragrance as a wearable everyday couture.  So, particularly handmade very little essence and particle of the perfume comes together so beautifully.”

Reaction to the product has been positive with many commenting that the packaging was enticing. Actresses Buhle Samuels and Larona Moagi also congratulated Coetzee who said the perfume will be sold online and at the retailer in Sandton.

Sarah Langa McKay ‘honoured’ to be face of brand

McKay who is a brand influencer and owns her own online store, Luvant, said she was honoured to be the face of the brand.

“So proud to be the face of @gertjohancoetzee’s new eau de parfum, Double Platinum, fragrance. I know this is like a dream come true for the Gert brand, honoured to have seen this grow from just an idea to a fully well-executed product that represents everything that I stand for: Elegance, presence and sophistication,” she wrote on Instagram.