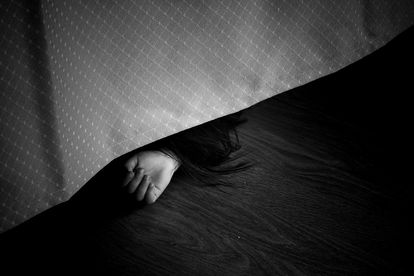 A tweep’s candid confession to committing GBV – by murdering his girlfriend and serving eight years behind bars – has gone viral on Twitter.
Image via Pixabay

A tweep’s candid confession to committing GBV – by murdering his girlfriend and serving eight years behind bars – has gone viral on Twitter.
Image via Pixabay

A Twitter user who admitted to killing his girlfriend and serving time behind bars is hoping to tackle the topic of Gender-Based Violence (GBV) by putting a face to a crime experienced daily in South Africa.

ALSO READ: ‘Those who never make it out’: Amanda du Pont wants ‘justice for Namhla’

On Twitter, Sizwe used the brutal murder of Eastern Cape woman Namhla “Hlehle” Mtwa last month, to shine a light on his own offences.

He tweeted on Monday 23 May: “Drag me if y’all want but I was a perpetrator of GBV. Served 8 years for the murder of my then-girlfriend. Still on parole. I have a message for the gents. DON’T DO IT!”.

Asked what were the actions that led to his unidentified girlfriend’s death, he responded: “It starts small. A voetsek, next time it’s a push, a slap….it keeps escalating”. When asked how he “sleeps at night” after taking someone’s life, Sizwe responded: “I’ve learnt to live with it”.

Sizwe also claimed that he was “sincere” about “finding a solution” for GBV.

In a Twitter Space on Tuesday evening, Sizwe defended being candid about his past actions on Twitter.

He claimed that his objective was to become the face of GBV and use his experience to educate others. He said: “We talk about GBV but there is no one who comes out. I thought it would be an opportunity  to learn and tackle GBV.

“GBV is not something perpetrated by faceless people, it’s by people in our communities and neighbourhoods. I’m sorry if it came across as arrogant”.

When asked by a tweep if he would ever commit GBV or murder again following his release, Sizwe replied: “What happened, it won’t happen again. It’s a personal choice”.

Sizwe added that he was “open to suggestions” on how he could make a difference.

During the Twitter space and on the Twitter timeline, users had mixed feelings about Sizwe’s story being in the public domain.

Some felt that Sizwe was too “flippant” about his GBV offences, during which he confessed to strangling his girlfriend to death in the “spur of the moment”.

@Maleven85: “And you are here enjoying your life. They should have looked you up and thrown away the key”

@leader_DD: “Only 8 years? Now a motivational speaker I guess. OKAY”

@NoX_Malcom: “Serving 8 years for murder is wild for me! You literally end life and only spend 8 years? Congratulations to you! This wild”

Others felt Sizwe was rehabilitated and that GBV was a tough topic that needs to be discussed with said perpetrators.

@lettucemtititi: “I think you need to be part of one of the organizations which deal with GBV. Your inputs & your first-hand experience might go a long way in helping others”

@caiph_sello: “Man is sharing an important message and most people are here stoning him. He has done it, he now knows it’s not right to kill. Let’s give him a break. The last part “Don’t do it” means a lot”

@OBSenare: “The fact that you are owning up to what happened. It is a sign of maturity and remorse to me. May her soul RIP and God help her family heal. My brother, you learned your lesson. Please be the voice that teaches our fellow brothers out there to do better.

@SosobalaK: “You have served your time. You are forgiven. I wish you the best in the future and I hope you can be used to teach about GBV”